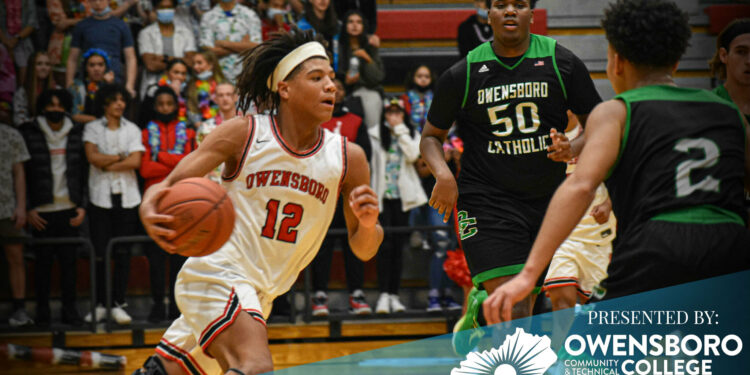 Controlling the glass and finding holes in Owensboro Catholic’s zone in the second half, the Red Devils battled their way to a 73-60 win to stay undefeated in district play.

Owensboro got off to a solid start offensively thanks to lifts from senior Amari Robinson-Wales and junior Cayman Powell, as they combined for 14 points in the quarter.

Junior Kenyatta Carbon accounted for the other three, as the Red Devils were able to go into the second quarter owning a 17-13 lead.

In the second quarter the two teams went blow-for-blow, playing at a rapid pace while trying to throw each other’s offense out of rhythm with zone defenses.

The Red Devils aggressiveness in attacking the zone made the slight difference in the quarter, as they took a 32-27 lead into the locker room.

Coming out of halftime, Robinson-Wale’s movement without the ball got him four straight points thanks to getting deep position in the zone.

This continued to be a trend in the third quarter, as Owensboro slithered in and out of the zone for 22 points in the third.

Meanwhile junior Ji Webb was single-handedly keeping the Aces in the game, scoring 16 of the team’s 19 points as they entered the fourth down 54-46.

Webb didn’t have the same luck in the fourth quarter, only scoring six points as Head Coach Rod Drake said that junior Dylon Talbott did a good job of containing him when they went to a man defense.

Webb still had a number of touches throughout the fourth, missing multiple opportunities despite having numerous defenders draped all over him.

He and junior Brian Griffith had double teams thrown at them all night long, but struggled to find their open  teammates when they were met with that pressure which is something Head Coach Tim Riley said the team has to learn how to handle better.

“[In] basketball, offense is based on double teams,” Riley said. “They double-teamed two of our guys hard, but we’ve gotta make plays off those double teams and create opportunities for everybody.”

This inability to break those traps by Owensboro’s defense was a huge factor in the Aces’ offense being slowed down in the fourth.

Regardless, Owensboro Catholic still found themselves down just 61-56 with just under five minutes left in the fourth.

However, thanks to some sharp shooting from freshman Will Hume throughout the game, the Red Devils were able to get inside time and time again while the Aces had to respect them from beyond the arc.

Hume has begun to become a key contributor off the bench for Owensboro thanks to his marksmanship, something Drake has utilized against zone defenses.

“You have to guard him,” Drake said. “We see a lot of zones and so he’s been a big plus for us. Our guys are learning how to play off of him as well.”

This balanced offensive attack throughout the game as well as an undying effort on the offensive and defensive glass were the ultimate factors in coming away with a 73-60 for the Red Devils.

“I thought we played well for about three and a half quarters,” Drake said. “We established a lead there and kind of hung onto it about the middle of the second half. Our defense picked up and we got to play a lot of people tonight, so overall we were pleased.”

Overall Riley felt that the final score didn’t portray how close the game actually was, stating that his team fought but just didn’t close out the game strong.

“This is a hard place to win at,” Riley said. “I don’t think it was a 13-point game. It was closer than that and then we just let it get away there late in the game.”

Owensboro was able to pick apart Owensboro Catholic’s zone much more in the second half, which helped them secure the substantial lead in the third.

While he doesn’t find fatigue as an excuse for their miscues defensively, Riley attributes the Red Devils success to a lack of work ethic when the Aces got a little gassed in the fourth..

Drake also noted their constant attack of the glass as a key factor in the win, saying that it is something that they emphasize each game in order to help give them a boost on both ends of the floor.

“It’s a conscious effort,” Drake said. “Everybody goes. We don’t have any one through five man, so everybody rebounds and we can rebound by committee.”

Defensively Drake and company also accomplished what they set out to do, which was creating chaos in order to disrupt Owensboro Catholic’s offense.

“We tried to keep the ball out of Griffith’s hands as much as possible,” Drake said. “But defensively we wanted to speed them up which we did a great job of tonight.”

Webb led all scorers with 28 points, while junior Brian Griffith finished with 15 points and junior Parker Gray followed close behind with 11 points.

Robinson-Wales led Owensboro with 23 points, while Carbon finished with 15 points, Powell finished with 14 points and Hume chipped in 11 points off the bench.

Owensboro advances to 12-4 overall and 3-0 in district play with the win, as they now have a quick turnaround with a tough matchup against Muhlenberg County.

The Red Devils will look to stay strong while packing the house as well, with all ticket sales going towards the Muhlenberg County tornado relief efforts.

Meanwhile, Owensboro Catholic falls to 8-9 overall and 1-2 in district play. Riley said that they’ll bounce back from this, as they have a week to improve before another district game against Apollo on Jan. 21.

“I’m not crushed by any stretch,” Riley said. “We got a lot of young kids that gotta learn. We’ll watch tape of it, try to learn from it and try to get better.”