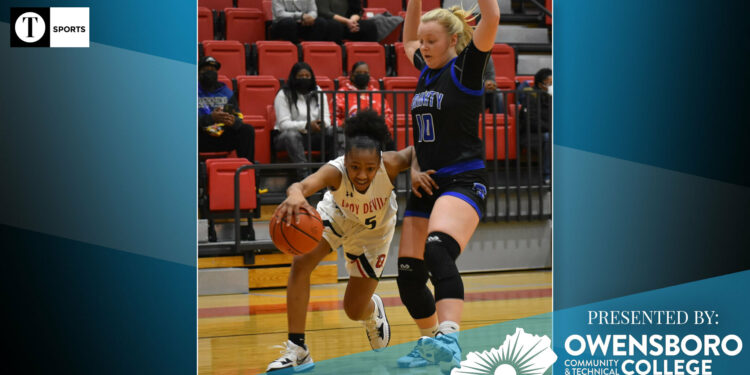 The Lady Devils’ defensive pressure and rebounding edge helped them secure a lead over Trinity (Whitesville) early, as they went on to secure a dominant 61-39 win.

Both teams got off to a slow start offensively, with neither team doing a great job of handling the basketball. However, Owensboro’s fullcourt pressure from the jump gave them a slight edge as they went into the second up 9-7.

The Lady Raiders had picked up some steam on offense to open up the second quarter, using some offensive rebounding help to take a 19-11 lead. Coming into the quarter Head Coach Jansen Locher had told his team following the first that they had to box out if they wanted to come away victorious.

“Stop letting them get offensive rebounds,” Locher said. “Put a body on somebody. Rebounding is not a size thing, it’s a hustle play. I told them I’ve gotta have five dogs that wanna get in there and battle and go get the rebound. They kind of woke up after that.”

The message didn’t click right away, but as the second progressed the Lady Devils’ chaotic fullcourt pressure started to pile up the turnovers for Trinity and an advantage on the glass led to a 14-0 run.

“Once our defense kind of picked up and started controlling their ball-handlers it led to us getting some transition points and some early buckets and just our girls being confident,” Locher said. “We pride everything on our defense and try to get everybody to play a little bit faster than they normally play and it just worked to our benefit tonight.”

Owensboro’s efforts on both ends as well as senior Cassidy Morris picking up her third foul halfway through the quarter gave them a 31-22 lead at halftime.

Head Coach Emily Hernandez said that the 13-point turnaround in three minutes during the second quarter is something the Lady Raiders can’t have happen, despite getting off to a decent start on the night.

“I thought that early we did a decent job in the first quarter and a half,” Hernandez said. “When Morris picked up her third foul, we talked to them at halftime about picking up your defense at that point, and somebody has gotta step up and get a stop. We just kept letting them go to the baseline and go to the hole.”

Things didn’t improve for the Lady Raiders in the third, as Morris picked up her fourth foul quickly and the Lady Devils had gone on a 10-3 run straight out of the locker room.

Trinity’s offense didn’t pick things up either, as Owensboro held them to just four points and trailed 46-27 going into the fourth.

“You can’t score four points in the third quarter and expect to be very successful,” Hernandez said. “I thought that they attacked us and I thought they were more aggressive than we were. I thought early on it wasn’t like that and then we got in foul trouble and we backed off.”

The Lady Raiders ramped up the intensity in the final quarter of play trying to make a comeback and using their plethora of fouls to their advantage to try and slow the game down. However, The Lady Devils’ defense continued to keep the Trinity’s offense at bay and secured a 61-39 win.

Junior Chandler Worth led all scorers with 23 points on the night, while sophomore A’Lyrica Hughes finished with 14 points.

Owensboro also got a nice lift from freshman Emani Badger off the bench, as she grabbed a number of blocks and rebounds while totaling five points.

“She’s really been coming along,” Locher said. “She’s taken advantage of the minutes she’s getting. We’ve got a couple of post players that are out for various reasons… She’s come back and she enjoys learning about the game. She’s always asking questions about what she needs to do and you can see tonight, we give her a couple of tasks, she’s out there and she does those tasks well. And she’s going to continue to get more and more playing time doing that.”

Eighth grader Unique Carter-Swanagan also has continued to grow and make a major impact whether she’s scoring or not throughout the season, helping run the offense as if she’s played high school basketball for years.

“Anything with girls has to do with their confidence,” Locher said. “With younger girls it’s hard because in middle school where they’re able to average 25-30 points a game, you come up to varsity and it’s a different speed of the game. She’s really coming along and she’s looking to just be more consistent now.”

Now with their second three-game winning streak of the season under their belt, the Lady Devils sit at 10-8 overall on the season.

Locher said they’ll hope to use their game against Union County at 7:30 p.m. on Tuesday to help them build confidence so the girls know that they can compete against Owensboro Catholic on Friday in hopes of getting the Owensboro’s first district win of the season.

“We got another one tomorrow [with] a quick turnaround,” Locher said. “[We gotta] make sure we get some rest and make sure that we have our legs for tomorrow. Our big push right now is we play Catholic on Friday and we feel that any time there’s a district opponent no matter where it’s at, it’s going to be a competitive game, especially early.”

Meanwhile, Hernandez said that there are a number of takeaways from the game, as the team will watch the film on Tuesday and try to recoup before they hit the hardwood on the road against Edmonson County at 6 p.m. on Friday.