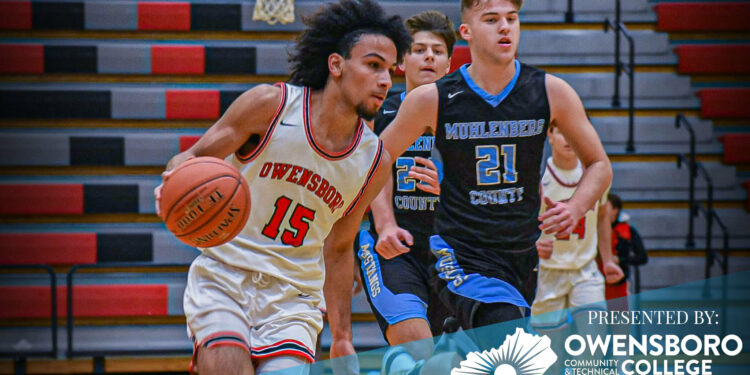 Owensboro’s offense struggled to finish all night long, as fifth-year senior Cole Vincent led the Mustangs to an impressive 68-55 win on the road.

The Red Devils got off to a slow start offensively, but junior Kenyatta Carbon’s aggressiveness kept them right in the game with him grabbing their first eight points.

Sophomore Chris Glover later broke the streak by going 1-2 at the charity stripe, tying the game at 9-9 with four minutes left in the first.

Despite the hot start from Carbon, Vincent was doing just the same for Muhlenberg County. He splashed in three triples from the left corner, finishing the quarter with 11 points as the Mustangs went into the second up 19-15.

Head Coach Rod Drake said he kept getting loose in matchups, as he just executed all the things that Owensboro thought he would do well.

“We lost him in transition,” Drake said. “All the things he did were things that we had talked about, we just lost him. That’s all it was.”

The second quarter brought more offensive struggles for the Red Devils, as they had a difficult time finishing around the rim and playing through contact.

This led to Owensboro not exceeding single digits in the second, as Muhlenberg County expanded their lead to 31-23 going into halftime.

The Mustangs offense didn’t skip a beat coming out of the locker room, rattling off 22 points in the third quarter.

Drake noted that Owensboro seemed to hit a mental wall in the third when some shots started not to fall and foul trouble ailed Carbon who had led the way for them offensively all night.

Thanks to some sloppy play to close out the third, this resulted in back-to-back layups for the Mustangs right before the buzzer and the Red Devils trailing 53-33 going into the fourth.

Despite Carbon fouling out early in the fourth Owensboro made some strides offensively, but it was too little too late as they fell to Muhlenberg County 68-55.

“We were a little short tonight, but we competed,” Drake said. “I thought everybody played hard and we had just gone through a stretch where we didn’t convert and missed easy baskets. I’m not talking about jumpshots. We probably went through a spurt where we missed five layups right around the basket so that crushed us and when we missed them they would go down and hit a three.”

Vincent led all scorers with 20 points on the night, while Carbon finished with 18 points to lead the Red Devils while fellow teammate Dylon Talbott finished with 11 as well.

Despite the loss, Drake was pleased with his team’s play this weekend and knows that they’ve gained some valuable experience that can help when the postseason comes around.

“We had a good weekend,” Drake said. “We went 1-1, won a district game last night and got to play against good competition. [It’s] someone we hope we’ll see down the road, so it was a good opportunity to play somebody.”

Owensboro Athletics was also able to make a generous donation of $1,570 towards the Muhlenberg County tornado relief efforts thanks to the ticket sales from the game.

Drake said he and Owensboro High School were thrilled to be able to help make a difference for the Muhlenberg County community, noting that nothing mattered more than that on Saturday night.

“It was awesome,” Drake said. “I never would want to go through nothing like that and it was great that we had an opportunity that we could help someone else. They’ve been through a lot. At that point when you see that at the end of the game, it shows you that basketball is just a game.”