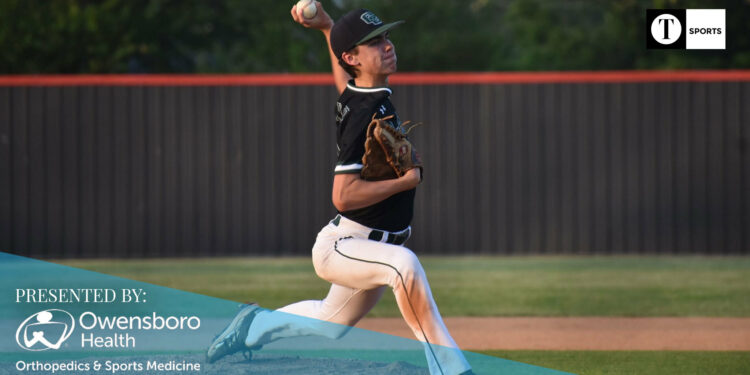 Errors and a powerful Aces’ offense was the Red Devils’ downfall in a 8-1 loss on Tuesday, as Owensboro Catholic finishes undefeated in regular district play for the second straight year.

It was the Aces who got on the board first after a scoreless opening inning, grabbing the first run of the game in the top of the second on an RBI groundout by freshman Parker Heistand.

The following at-bat senior Luke Evans sent an RBI single to left, before an error allowed Owensboro Catholic to score once again and take a 3-0 lead into the bottom of the second.

Owensboro was able to get its first hit of the game in the bottom of the second, but nothing would come out of it and the Aces would extend their lead to 4-0 in the top of the third with an RBI groundout from freshman Brady Atwell.

Junior Connor Hallmark seemed to be finding a groove in the top of the fourth with two straight groundouts to start the inning, but a single by senior Everett Munsey and a Red Devils’ error put runners on first and second for senior Braden Mundy.

Mundy came through with a single scoring one, but another runner was thrown out trying to get back to second on the relay and Owensboro Catholic would just add the one to take a 5-0 lead into the bottom of the fourth.

Owensboro’s offense showed signs of life in the fourth, quickly loading the bases with a pair of singles and a hit by pitch to kick off the inning. The very next at-bat eighth grader Elijah Hampton singled to right to give the Red Devils their first run and make it a 5-1 ballgame.

However, sophomore Ben Hyland buckled down and got a strikeout and back-to-back pop outs to get out of the jam and keep it at 5-1. The Aces had the answer once again though, getting an RBI single from Atwell to make it 6-1 after a leadoff triple from senior Alex Castlen.

“I thought Ben did well,” Head Coach Jody Hamilton said. “He got out of that one bases-loaded jam where they had nobody out. They got a run and then he got the three outs in a row. I was really pleased with his effort and it builds confidence for him and us down the road.”

Errors continued to plague Owensboro in the top of the sixth, as they came back-to-back to plate two runs and make it an 8-1 game before Ashley worked out of the jam to go into the bottom of the sixth. These were the final runs of the evening, as Owensboro Catholic came away with the 8-1 win.

“Any time you make more errors than score runs it’s going to be tough to win,” Head Coach Jacob Fiorella said. “Especially in the 9th District. Our pitchers did a good job of throwing strikes, our defense just has to play clean behind them and that game is a little bit closer than the score would indicate.”

Despite falling to 12-16 and 0-6 in district play, the Red Devils can use this matchup as a lesson learned for when they face the Aces in the first round of the 9th District Tournament this weekend.

“Honestly, you look at it and say you gave up five unearned runs and that makes it a much tighter game if we can just clean up the defense,” Fiorella said. “That’s been a problem for us in spots all year… We’re going to try and learn and grow the next three days and prepare for Saturday.”

But first Owensboro will have one last home game to close out the regular season, as they will battle with Edmonson County at 6 p.m. on Thursday.

On the other hand, Owensboro Catholic improves to 24-4 with the win and remains undefeated in regular season district play for the second year in a two at 6-0.

Senior Hayden Ward had a strong outing in relief, allowing no runs on two hits and striking out four, while Castlen also helped Hyland secure the win with a scoreless seventh inning out of the pen.

Offensively Mundy and Atwell led the way with a pair of RBIs each, while McFarland, Evans and Heistand all chipped in one as well. The Aces offense has been huge during their now nine-game winning streak, scoring at least eight runs in every game except one during that stretch.

Owensboro Catholic secures the No. 1 seed for the 9th District Tournament with the win and will see the Red Devils again on Saturday in the first round at 3 p.m. While it’s a nice win, Hamilton says that they have to put it in the past and take things game by game as the postseason begins.

“You gotta forget everything,” Hamilton said. “We start the season over starting Saturday and hopefully we come out with a really good attitude and are ready to get after it.”

Before the Aces see Owensboro this weekend they have one last regular season game, a road matchup with Meade County at 7 p.m. on Thursday.