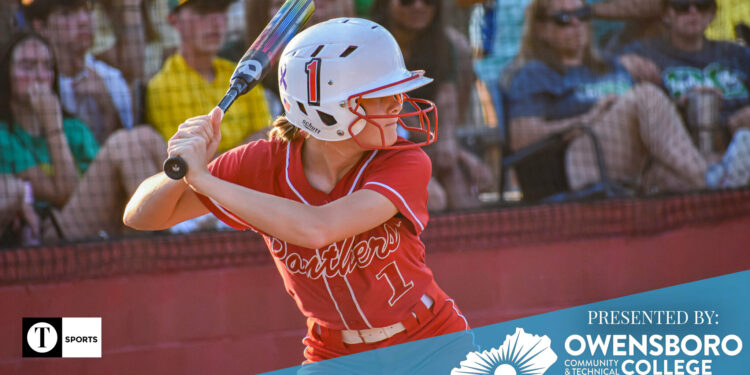 Junior Raylee Roby’s near no-hitter and some fireworks from eighth grader Annie Newman stood out for the Lady Panthers on Friday, as they were able to grab an 8-1 win over Owensboro Catholic to win their third straight 9th District Championship.

The Lady Aces got the first real scoring opportunity of the game in the first, getting back-to-back one out walks to put runners on first and second. But junior Raylee Roby was able to work out of the jam, keeping things scoreless going into the bottom of the first.

From there, Roby took over the game from the circle. After the two walks in the first inning, the righty didn’t allow another walk or hit through three.

Roby had struck out seven of the nine outs to that point in the game and Daviess County took advantage offensively in the bottom of the third. It was eighth grader Annie Newman that put the Lady Panthers on the board, sending one to left and letting wind carry it over the fence to take a 1-0 lead.

Daviess County got on the board again in the bottom of the fourth, getting an RBI double from senior Millie Roberts to start a rally. Shortly after junior Kayley Payne hit a two-out RBI single to right, giving the Lady Panthers a 3-0 lead.

However, it was Annie Newman who blew things open, sending another home to run left and facing a 2-2 count. This time it was a three-run shot, giving Daviess County a 6-0 lead going into the fifth.

Owensboro Catholic’s struggles continued as they walked in a run and gave up another on a fielder’s choice to make it an 8-0 game in the bottom of the fifth. Annie Newman had a chance to add more run production to her credit with two outs and the bases loaded, but junior Brooke Hamilton bested her this time with a strikeout to send it into the sixth.

Junior Bailey Hamilton did finally put the Lady Aces on the board with their first hit and run of the game with a solo shot to start the seventh, but it was too little too late as Roby retired the next three batters to secure the 8-1 win and the Lady Panthers third straight 3rd Region Championship.

Roby was in total control of the game from the jump, toassing all seven innings in the circle while allowing one run on one hit, walking three and striking out 15 on the day. The junior has consistently put together strong outings throughout the season and today it was her rise ball and gameplan that helped her excel.

“I mean pretty much just going inside on all of them was working,” Roby said. “Which I knew that they were going to end up getting on one, but I knew I could always trust my defense and offense to help me.”

Meanwhile, Brooke Hamilton didn’t have her best stuff on Friday, allowing seven earned runs on 11 hits, walking two and striking out seven in the complete-game outing. While she struggled on the day, Head Coach Jeremy Phelps doesn’t think the team’s defense did her any favors.

“We just didn’t make the right adjustments,” Phelps said. “We let a couple plays, I feel like get away from us. We weren’t aggressive enough on defense. They scored five runs in the fourth inning and they should’ve had one run if we were aggressive on plays where we let the ball drop.”

It was Annie Newman who stole the show offensively for Daviess County, tagging Hamilton for two home runs and four RBIs.

“I got a lot of inside pitches and I knew that early in the count I was swinging at them high,” Newman said. “So I knew they were going to come up and in. I was just staying aggressive and getting the bat on the ball.”

Newman personifies the phrase big things come in small packages, as the eighth grader has shown plenty of pop this season at the plate despite her stature to help the Lady Panthers succeed.

“She’s got the power,” Biggs said. “And again, she’s being selective. She’s kind of got the nickname kiddingly of being ‘the hacker… But she’s all in, she’s all business. Once we settled in with her at short, we knew she was a gamer. Even though she’s an eighth grader, no stage is too big for her.”

Daviess County earns the three-peat of the 9th District Championship with the win, something many could have predicted at the beginning of the season. However, Biggs said his team hasn’t folded under the pressure despite having a target on their back this eyar and that their level of focus is why they are so successful.

“This is something everybody expected from us and that’s a lot of pressure from 16, 17 year old kids…” Biggs said. “They were pretty focused. There wasn’t a lot of cheering and hype before the game. As coaches we were talking about it and I said ‘they’re just dialed in.’ They know the task. We move onto region and that’s one goal and now you gotta move on or you don’t.”

With another piece of hardware added to the trophy case, Daviess County now turns its attention to regionals. As long as the Lady Panthers stick to their motto this season and don’t let up, Biggs feels that they can make another deep postseason run.

“We’ve created an environment over here that if you trust the process and you put in the work you’re going to be successful…” Biggs said. “That was kind of our mantra this year, just get better. If everybody on our team continues to get better, then the team is going to get better. We’ve got people that have bought into that and we’ve got some people that have really stepped up.”

On the other hand the Lady Aces will look to move on from the tough loss fairly quick, as Phelps noted they have to have a short memory going forward to make some noise in the postseason.

“Everything is reset,” Phelps said. “Single-elimination, so you throw the records out and everybody is 0-0 in postseason play. That’s gotta be the message. We didn’t play good here tonight, but that doesn’t matter… We’re going to hit it hard the next couple of days to make a region run.”