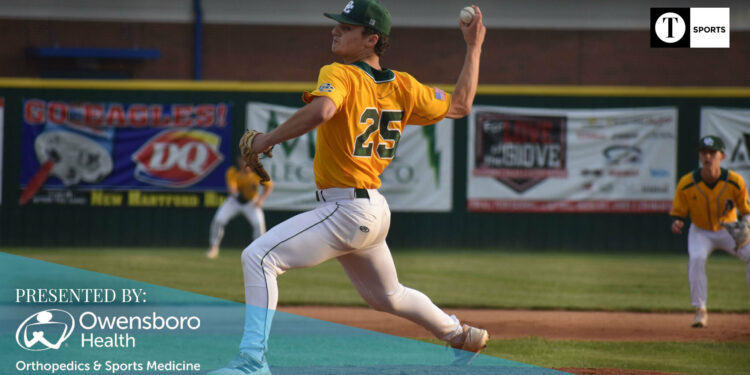 A strong fourth inning and a solid relief performance from senior Hayden Ward were crucial facets of Owensboro Catholic’s game on Tuesday, as the Aces were able to grab their third straight 9th District Championship with a 6-3 win over Apollo.

Apollo was looking to start the game off strong and apply pressure on the Aces in the first, but some baserunning mistakes nearly killed an early scoring threat as senior Harrison Bowman was caught in a rundown between second and third for the second out of the inning.

However, junior Nick Judd had advanced to second and when freshman Parker Heistand’s throw a ground ball sailed past first, Judd scored and gave the Eagles the first run of the game. Following another Aces error, junior Josh Mayes singled to left, bringing in a run to give Apollo a 2-0 lead going into the bottom of the first.

Owensboro Catholic made sure to apply pressure offensively as well, as senior Luke Evans quickly found himself on third with one out after a walk, stealing second and a balk. This led to senior Sam McFarland giving the Aces their first hit, singling to right to make it a 2-1 game.

McFarland stole second and senior Braden Mundy walked shortly after, but sophomore Noah Cook bounced back to get two straight strikeouts and keep the Eagles out in front 2-1 going into the second. Apollo took advantage when they went to the plate, quickly loading the bases with one out thanks to a few hit by pitches and a single from Bowman.

Judd proceeded to bring a run on a sac fly to right to take a 3-1 lead for the Eagles, but that was all they would get as senior Alex Castlen got Wells to ground out to second to end the half inning.

Owensboro Catholic didn’t take long to respond, as senior J Crabtree hit a leadoff double and then moved over to third on a sac bunt by senior John Frey. Heistand proceeded to double to make it a 3-2 game, but after an intentional walk of Evans senior Everett Munsey drilled a grounder that ricocheted off of Cook’s foot to tie the game at 3-3.

Cook would return to the mound and strikeout McFarland, but he hit Mundy the following at-bat to load the bases with two down for Parson. But Cook was able to bear down once again, getting a fly out to end the inning and keep things tied up at 3-3 going into the third.

After some pitching changes and a scoreless third inning, it was the Aces who got back on the board. sophomore Cayden Crabtree came in for junior Tyler Payne after surrendering a walk and a single to start the inning.

Crabtree didn’t have much better luck, giving up an RBI single to Munsey to make it a 4-3 game. An error on a throw to third moved runners to scoring position and McFarland was intentionally walked to load the bases with no outs.

Mundy proceeded to single to score two, making it a 6-3 game with runners in scoring position and no outs for Parson. But Parson and freshman Brady Atwell not struck out, before Cayden Crabtree got a ground out to end the inning and send it into the fifth with Owensboro Catholic up 6-3.

The Aces found themselves with another big scoring threat in the bottom of the fifth, as sophomore Braxton Franey entered the game and walked the first batter he faced to load the bases after Bowman had walked two earlier in the inning. But Franey was able to get Mundy to strike out to work out of the jam, as the Eagles went into the sixth still trailing 6-3.

Apollo didn’t take advantage of the opportunity to close the gap offensively, but went into the seventh with the top of the lineup heading to the plate after a scoreless bottom half of the sixth for Owensboro Catholic for one final chance at a comeback.

The Eagles did finally get their first hit of the game off of senior Hayden Ward to lead off the seventh, but the righty bounced back and wrapped up a scoreless relief appearance to help the Aces grab the 9th District Championship at 6-3.

Ward tossed four innings out of the bullpen for Owensboro Catholic, allowing no runs on one hit, walking no one and striking out four en route to the win. Ward has been a key pitcher for the Aces all season long and Head Coach Jody Hamilton said his aggressiveness and belief in the defense behind him is what helps him succeed.

“He just located more than one pitch,” Hamilton said. “He comes right after you and if you hit it you hit it and he’s got confidence in our fielders and that helps.”

The Eagles didn’t have the same luck on the mound, using six different pitchers and allowing six earned runs combined. Apollo also struggles to get hits consistently on Tuesday, getting four as a team with three coming from Bowman.

“We have to swing the bats better,” Head said. “I think four hits total and three of those from one guy. Eight guys went one for whatever on the day. You’re not going to win many baseball games with that. The fact that it was a three-run game and we had a chance was pretty impressive I think given the way we did swing the bat outside of one or two guys.”

It was the upperclassmen that led the way offensively for the Aces, getting a pair of RBIs from Munsey and Mundy, while getting one from McFarland. Despite not having momentum early, Owensboro Catholic’s steady offense helped them keep the pressure on Apollo to get the win.

“We’ve pretty much played that way all year,” Hamilton said. “We’re going to stay in it and fight and scrap. It seems like we play better when it’s a tight game a lot of times than we do when it’s a blowout, but I was really happy with the boys. We had some timely hits… It was a really nice win.”

The win marks Owensboro Catholic’s third straight district championship, but Hamilton and company aren’t ready to stop there and have their eyes set on a run at state.

“We definitely want to end up in Lexington,” Hamilton said. “I think we just gotta stay the course and keep our focus and keep pitching well and play a little better defense and we’re there. You’re not going to win any championships without pitching and defense, so you gotta do both and then of course you gotta have timely hitting. As long as we can do those things, we’ll see how it goes.”

Despite the loss, Apollo has already secured its spot in the 3rd Region Tournament. Head said the Eagles will have to put this one behind them quickly and work hard to shore things up in practice to help them make a deep postseason run.

“Something that my guys are sometimes better than me at is having a short memory,” Head said. “I remember everything and it all comes back to me, but they do a good job of separation and kind of moving on. So that’s the message tomorrow. Tomorrow’s a new day and get back to practice and get back to work and work on two or three things and see what we can do on Saturday.”