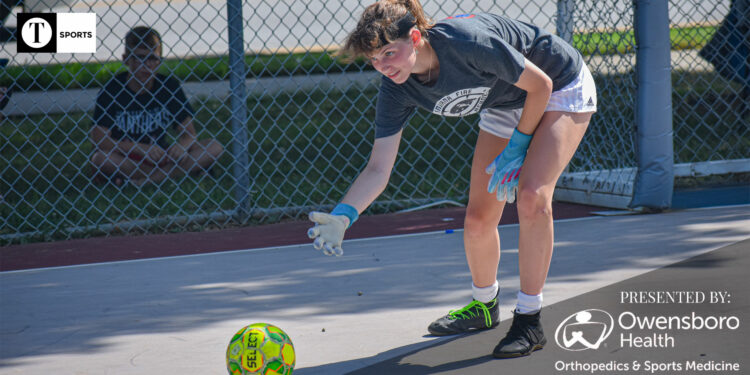 While the fall season may be months away, local girls and boys soccer players have been keeping in shape in the fourth annual Owensboro Street Soccer Bowl to start the summer.

Brother Nikos and Christakis Agisilau were back at it again in May, promoting the tournament for its fourth go around. They were able to get 37 teams total across a plethora of girls and boys age groups.

Owensboro Catholic goalie Abby Payne was one of the players that competed in the soccer bowl—which started on Monday, June 13 and will run until Monday, June 20 because of heat and extenuating circumstances for a championship game—playing for the Pink Panthers in the varsity silver division and winning the championship.

“This is my second time playing in the street soccer bowl,” Payne said. “Both times have been extremely fun. I’ve been able to play with my club teammates against people we would never be able to play in the regular season. The bowl allows us to play different competition, but to still have a lot of fun.”

The street court used at Legion Park is much smaller than what most soccer players are used to, confining the field of play and causing less players to be competing at once. However, the result is a faster-paced game that can help players grow by learning different ways to find success.

Daviess County boys midfielder and soon to be senior Sean Higgs was also competing in the High School gold division and shared a similar sentiment.

“Playing on a surface like that requires players to think and play quickly,” Higgs said. “It also demands some creativity due to the small playing area, this allows players to practice one-on-one skills and maybe break out some skill moves they wouldn’t normally have to.”

Payne said that the primary goal of playing soccer doesn’t change with the setting, but that it just helps players learn how to make adjustments and figure out some of the basics. It showed as Payne and her team made a deep run into the tournament, getting help from a teammate that had never played street soccer before that was key to their success.

“The talent level in the bowl varies, and with that discouragement can come,” Payne said. “But it allows the players to compare themselves to others and have the determination to improve their game. One of my teammates figured out how to play (because she’s never played street soccer before) and what to do against our opponents and had a huge impact, especially in our semifinal game.”

Higg’s is still relatively new to the Owensboro Street Soccer Bowl, but he’s enjoyed the mix of high intensity and fun-filled matches across the tournament.

“This was my second time playing in the tournament and in my opinion the event is a great way to find some friendly competition and play in a more carefree environment rather than playing in some sort of important game for your school, club, etc,” Higgs said. “[It’s a] super fun event.”

Payne and Higgs also agreed that the Agisilaou brothers do a good job of making people want to come out and watch as well, adding to the atmosphere of the games with plenty of fans.

“One of my favorite things about the street soccer bowl is the people in the community that will show up to watch teams play,” Higgs said. “Having people watch you play and cheer you on is something that I think is special and definitely adds to the street soccer atmosphere.”

This holds true for Payne as well, as when she looks back on some of her fondest moments in the Owensboro Street Soccer Bowl she thinks of all the love and support she received while playing.

“Well, my favorite memory would be my team winning this year, but a close second would be how so many have come out to support myself and my team both years I’ve played,” Payne said. “It’s amazing to see how many people support their friends and family when they’re playing. It’s truly wonderful.”

Both players wanted to make sure that Nikos and Christakis were given their flowers, knowing they’ve helped create memories like this and helped improve players for four years running.

“Big thanks to the Agisilaou brothers for continuing to put on the bowl,” Payne said. “It’s such a big help, especially when preparing for preseason.”