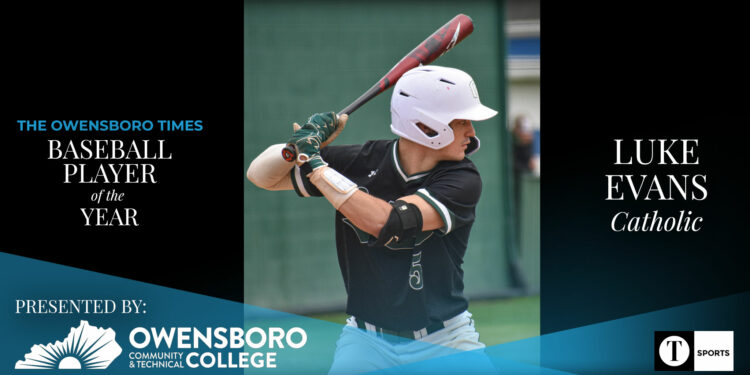 Following a strong senior campaign for Owensboro Catholic’s Luke Evans, he has been named the 2022 Owensboro Times Baseball Player of the Year.

Evans was very grateful for receiving the honor, thanking the Owensboro Times as well as his support structure for helping him receive the award.

“I would not be where I am today without my amazing parents, teammates, and coaches that I have had throughout the years,” Evans said. “They have turned me into the player and person I am today.”

The versatile infielder held down the leadoff spot for the Aces all season, hitting three home runs and recording 29 RBIs to go with his .486 batting average and 38 stolen bases (40 attempts). He helped Owensboro Catholic finish the season with a 30-5 record, with their season coming to an end in the first round of the state tournament.

While Evans and his fellow teammates and upperclassmen didn’t make it to the state championship game like they had hoped, he will always cherish this final season of his high school with some of his closest friends.

“My favorite part about this season was that I got to play it with 8 of my best friends,” Evans said. “Our senior group has been playing baseball with each other since we were four years old. They have been my brothers my whole life. When I look back on this season, I’m not going to remember the outcome of certain games. The things that are going to come to mind when asked about the 2022 Aces is the brotherhood we had as a team. The memories we made as a group will stick with us forever.”

Evans attributes his success to the teammates he’s had along the years, noting that it is those guys who have put in the extra time and effort that have truly helped him continue to develop over the years.

“I have had great teammates and coaches that have helped me more than ever the past year to improve my game,” Evans said. “Stewart Ijames, former Owensboro Catholic star, worked countless hours with me to improve my swing. Luke Scales and I worked out and hit together almost every day during the offseason.”

While Evans is still going to be playing baseball at home this summer with the Owensboro RiverDawgs, he is set to play collegiately at Wabash Valley next spring. He is thankful for all the memories he’s had as an Ace and knows that his time at Owensboro Catholic has helped prepare him to excel at the next level.

“Owensboro Catholic baseball has definitely prepared me well for Wabash Valley College,” Evans said. “Coach Hamiltion and the program has taught me the importance of working hard to achieve my goals and coming out every day to give my all. I’m forever grateful for the mark Owensboro Catholic has left of my life.”