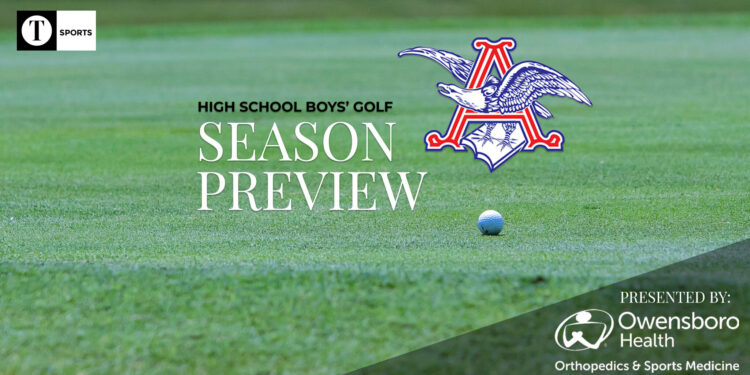 With Jarrod Carter moving over to become the Head Coach of the boy’s golf program at Apollo, he will have a number of weapons on the team with a strong junior class leading the way.

It’s Trevor Cecil and Ethan Clements that will be crucial players for the Eagles in 2022. Cecil fell just shy of qualifying for state last year in his sophomore season, while Carter expects Clements to consistently improve as the season progresses.

“Trevor is very talented,  hard working and already has a high-level game,” Carter said. “I think we can take it to the next level. Ethan is a very solid ball striker and is capable of shooting competitive scores, but needs more tournament experience to put his skills to the test.”

Sophomores Alex Bowlds, Caleb Poe and Mason Julian will round out the top-five for Apollo, as all three played some varsity golf last year. Carter said that the trio is constantly learning more about the game and having been improving some of their fundamentals.

One of those fundamentals being their short game as Carter said that it as well as focusing on the mental side of golfing as well is what will ultimately help them improve their scores quickly.

“I’m pushing the players to understand their short game is the quickest area to improve scores.  We all want to see quick success in our efforts,” Carter said. “Another key is to teach them about the game. They can play golf, but they need to learn how to play. That means we learn how to practice a certain skill and we use it in tournament play. It’s harder than it sounds.”

Carter is stepping into new territory himself, having coached boys twice and coaching girls golf for the past 11 years. He said he is playing catch up, learning how to coach a team again while still developing the team individually on and off the course.

“Golf is still an individual sport and I’m learning the areas to make quick improvements in each player,” Carter said. “We are practicing fundamentals to get a better foundation. I’m working on my relationship with the players to get their buy-in but I think we will see improvement over the season.”

All in all Carter said his  goal is to show how they can get better and encourage them to put the work in outside of their time together to accomplish it. He went on to say they are progressing in the right direction so far and is excited for the season ahead.

Home » Sports » Carter, Apollo boys golf aiming for improvement on and off the course to create success