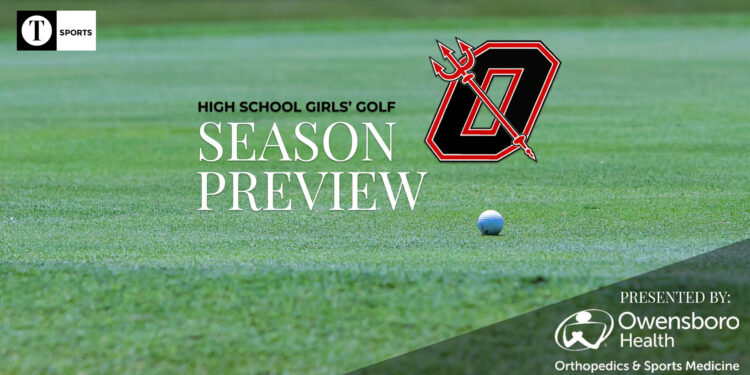 Owensboro girls golf is focusing on doing the little things right as the 2022 season gets underway, hoping to steadily improve in multiple facets of the game to find success.

The Lady Devils will be led by multiple athletes with years of experience, including Junior Ellie Watson—who is going into her fourth season with the team—senior Lily Galloway and sophomore Kaylei Moore.

They will also be joined by seventh grader Ryann Kasey, someone Head Coach Kip Walters thinks can contribute right away thanks to her experience in the Junio Go Golf Series.

Walters said he expects Owensboro to be competitive with other teams in the region, saying that the experience and talent levels from the current roster are much improved from season’s past. One thing that he thinks will help them do so is continuing to get better around the greens.

“A good short game can really cut down on strokes and overall scores,” Walters said. “We also can’t let those moments where we aren’t playing well get to us. You have to let those moments go and get ready for the next.”

Walters said that the mental side of the game will also be crucial, as they don’t need too overperform and stay strong mentally with a shot-by-shot approach.

“We need to improve by putting ourselves in situations where we can be successful,” Walters said. “We can’t try to do too much at once. We have to take it one shot at a time and try to be in a spot where we feel comfortable with the next shot. We have to learn to take what the course gives us and then learn to work around the rest.”