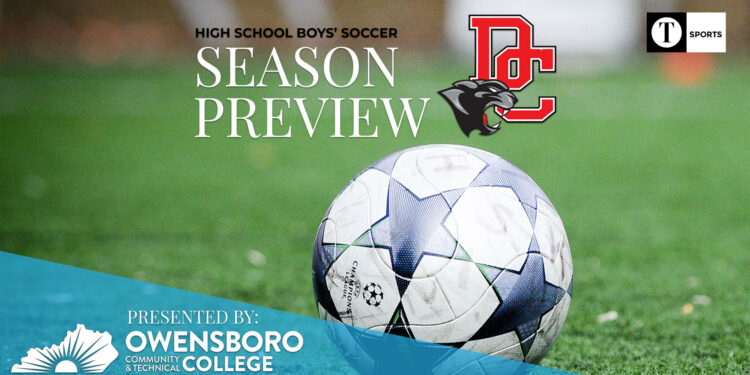 Falling just shy of a trip to the State Championship last season, Daviess County boys soccer still has an impressive arsenal of players looking to make another deep postseason run.

The Panthers finished last season with an impressive 22-2-4 record, having lost their third game of the season before going on a 20-game winning streak before falling in the state semifinals to Covington Catholic.

Daviess County returns an influx of its roster from a year ago, with the majority of their starting lineup with years of experience under their belt coming back to the pitch for the Panthers.

“Nate Dailey returns as a four-year starter,” Sandifer said. “Hayden Boswell and Sean Higgs are both full or part-time starters since their freshman year. Dax Sandifer, Ahmed Abdullahi, Andrew Alexander, Davian Clark, Braden Dant, Eli Watkins and Jack Quisenberry all return as starters for the last season or two. So, we have a very experienced squad that has been through battles in the past and know what to expect.”

Daviess County will see some changes as with Cody Clark’s graduation, Sandifer said that he expects a good junior season out of Conner Johnson will become the full-time starting goalkeeper. Sandifer also expects some returning players to make a much larger impact on the varsity team this year, with a number of players battling for some rotation time.

“Although he played in goal part time last year, Conner Johnson becomes the full time starter this season and we look for him to have a good junior year for us,” Sandifer said. “Sam Glover will also make a bigger impact on the varsity team this year. We could also have a couple of other seniors in Carter Hoak and Wyatt Pierce who could have a big impact, as well as a handful of juniors and sophomores who are trying to earn some quality minutes on a senior heavy team.”

In order to have the success that the Panthers have had in recent years, playing against the best of the best is a must. That doesn’t change this season, with Sandifer and company facing a very challenging schedule.

“We will be put to the test all season and I expect our players to rise to the challenge each game,” Sandifer said. “I hope our schedule prepares us for the postseason and forces us to play at a high level each night.”

In order to compete against some of the top teams in the state as well as at the district and regional level, Sandifer said that leadership from his upperclassmen will be vital to the success of their gameplan. Pair that depth that they want to take advantage of, the Panthers are hoping to wear opponents out with their high levels of intensity.

“Our leaders on the team have to keep this group focused and striving to get better each game,” Sandifer said.  “We need the work rate of the players to be off the charts when they are in the game.”

Daviess County had a stellar 2021 campaign and managed to retain all but a few players, so Sandifer said it’s hard to find things that really need fine tuning. All he can hope is that the players’ hunger to win doesn’t waiver, as they will ultimately decide how far they go this season.

“It’s hard to pinpoint which areas need improving when you have the type of season we had,” Sandifer said. “The players decide the goals for this team. I know what they are capable of and I have my goals for this group. But it’s really up to them whether we reach any goals we set.”