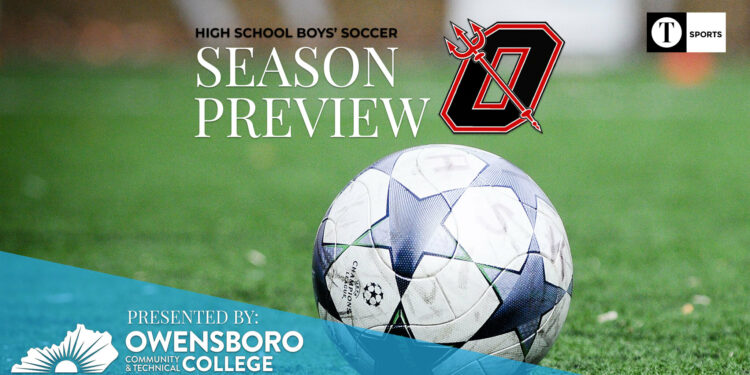 Following a season in which a young Owensboro group gained valuable experience, the Red Devils are looking to pair that with some new pieces into a strong year on the pitch.

Owensboro is coming off of a 2021 season in which they went 8-10-2, but took big leaps as a program with young talent. Now that talent has turned into depth for Owensboro, with multiple threats coming back for this year.

“Top returners this season is fortunately a difficult question to answer this year,” Haley said. “We are bringing back several starters from last year including defensive cornerstones Jacob O’Bryan (Sr) and Dustin Payne (JR), midfielders in Ryan Sovar (So) and Sang Thang (Jr) and strikers in Aiden Fregoe (Sr) and Peter Saang (Jr).”

Expectations are at its highest for Owensboro soccer as opposed to recent years, as experience will help push them ahead. Haley said that O’Bryan leads the team in that department, followed by plenty of others who can become crucial leaders for the group.

On top of their returning core, Head Coach Ryan Haley expects certain players to make larger impacts from a year ago. Junior Arlo Johnson and sophomore Romer Payne are two of those players, as they both saw time last season and Haley said that they’ve already made drastic impacts on the team in practice.

Despite the strong core the Red Devils will have, the depth isn’t as far along as Haley would like. So they are stressing the importance of staying healthy and the players’ fitness to keep players competing at a high level for 90 minutes.

“I am very excited about our roster, although we are a bit shallow on the depth pool regarding experience,” Haley said. “Due to this another key to success will need to be fitness, as this allows our more experienced and technical players to stay on the pitch longer.”

With this newfound experience, Haley is positive they will see improvement this season isn their ability to win the 1v1 battles on the wings in the attacking third.

“In 2021 we were starting 5 players that were 15 years of age, and 1 player who was 14,” Haley said. “We struggled with 1v1s in 2021 due to size and speed that typically comes with age in varsity sports. This year those boys are now 16, bigger, faster, and much more confident.”

Haley also feels that they will see great improvement in their ability to keep the ball, noting that they have improved physically as well as mentally. As long as they can stay the course and give it their all every game, Haley thinks Owensboro is more than capable of shaking things up in district play.

“Limiting turnovers in dangerous areas was our Achilles heel last season,” Haley said. “This year our possession, shielding, speed, size, and soccer IQ are significantly upgraded as well as collectively more technical on the ball. Overall, I’m excited for this group and I believe they can be as successful as they want to be.”