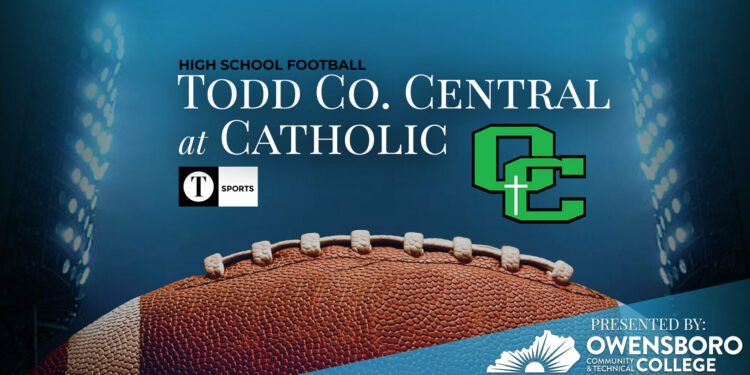 Owensboro Catholic football is looking to grab its second straight district win on Friday after a dominant showing on both sides of the ball last week, as they host Todd County Central at 7 p.m.

The Aces were clicking on all cylinders last week, using a huge second half to expand their 14-12 halftime lead into a 48-12 win. Sophomore quarterback Brady Atwell had a solid game under center despite two interceptions, throwing for 301 yards and two touchdowns on 24-33 passing and rushing for 86 yards and a touchdown on 12 carries as well.

Junior Tutt Carrico led the way offensively, getting a pair of rushing and receiving touchdowns, 78 receiving yards on six catches and 21 rushing yards on four carries. He was also a menace defensively, earning two interceptions—with the latter being a pick six.

Owensboro Catholic also got a big game out of Deuce Sims who caught 10 passes for 102 yards, while sophomore Vince Carrico helped out of the backfield with 48 yards and a touchdown on 12 carries.

The Aces will need their defense to show up big again this week, as they will be facing a Rebels team that is coming off of a 30-0 win over Monroe County. Todd County Central has scored over 25 points in all but one of its games this season, toting a potent offense that is led by senior quarterback Gavyn Nolan.

Nolan averages 154 passing yards per game to go along with 1.4 touchdowns per game, while also rushing for 88 yards and a touchdown per game. He also has a dynamic backfield to work with, as senior Jamarion Smith and junior Ricky Woodard average 77 and 51 rushing yards per game respectively.

As a team the Rebels defense isn’t nearly as sharp, having allowed over 25 points in every game except for their matchup with Monroe County. With both teams having plenty of offensive power, the district battle could turn into an offensive showdown when they take the field at Steele Stadium at 7 p.m. on Friday.