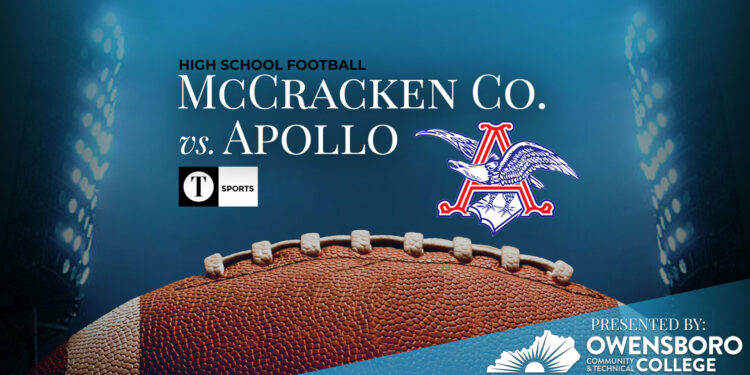 Following a tremendous comeback win by Apollo at home in week five, they will look to carry that momentum into a road matchup with McCracken County this Friday.

Trailing by as much as 34-13 against Meade County, the Eagles were able to force overtime and grab a 55-54 win on the legs of some spectacular play from senior quarterback Christian Combs and a big defensive stand when Meade County’s two-point conversion could’ve given them the lead.

Combs threw for 354 passing yards and four touchdowns on 18-28 passing, while also running for 107 yards and three touchdowns on 17 carries. Four different wide receivers caught a touchdown pass in the game, with junior Eli Masterson’s six catches and 129 yards leading the way.

Apollo will be looking to replicate its 56-49 win from last season on Friday, taking on a Mustangs that is also coming off of their first win of the 2022 campaign. McCracken County defeated Marshall County 42-7 in week five, getting 131 rushing yards and three touchdowns on 12 carries from junior Zeno Cornelius.

Senior Pryor Lamb held things down under center, throwing for 155 yards and two touchdowns on 13-18 passing. With the ability to also make plays on his feet, Head Coach John Edge said that they have to get pressure on him quickly in the pocket.

With district play opening up this week and two teams hungry for the first district win of the season, Edge said that the Eagles have to stay sharp mentally and put the beginning of the season behind them.

“Focus this week is what matters,” Edge said. “The last five weeks doesn’t matter. We are in [our] district [portion of the] schedule and it’s go time.”

With a barrage of players back from previous injuries and some momentum from its first win of the season last week, Edge and company know they will have to leave it all out on the gridiron to come away victorious this week on the road at 7 p.m.

“Just keep building off what we do and with our kids coming back from injuries we should be fine…” Edge said. “We have to keep their offense off the field, score and play great defense [to come out on top].”