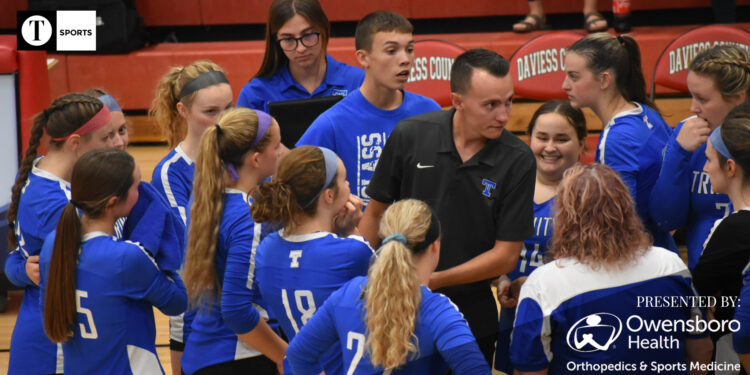 Following a historical season in which Trinity (Whitesville) volleyball nearly grabbed the school’s first ever regional championship, the Lady Raiders have not skipped a beat and are poised for another deep postseason run in 2022.

Trinity finished 27-6 overall in the 2021 campaign, grabbing a district championship while going 20-5 in region play before eventually falling to Daviess County in the 3rd Region Championship. The Lady Raiders lost key players from the roster following the season, as Cassidy Morris, Taylor Pedley, Corli Mills and Bailey Millay graduated.

While the quartet of players was responsible for a good chunk of the team’s production last season, Head Coach Daniel Morris and company didn’t set the expectations any lower when getting back to work in the offseason.

“Our goal as a team was to replicate last season the best we can, or even go above it,” Morris said. “Last season we graduated four seniors who all played big roles in our historic run. However, I have had some key players that returned from last season and have stepped up in playing new roles on this year’s team.”

That expectation has held true this season, as they have strung together a six-game winning streak in which they swept every match and a nine-game winning streak to help them sit at 21-6 overall. The Lady Raiders are also undefeated in district play at 7-0 and an impressive 16-2 in region play,

Senior Josie Aull is one of the key returnees, as her ability to set up the offense hasn’t changed this season, tallying 563 assists with six games left in the regular season. The team has also gotten plenty of kills from multiple players, including Hannah Nash’s team-leading 256, junior Georgia Howard’s 138 and sophomore Kenzie McDowell’s 115.

Morris said this group of players have really come together and played well together, getting a balance of newcomers and upperclassmen that have taken on new roles to find success. He went on to say that the bonds that they made over the preseason summer games have really come along in helping them start the season off good and growing as the season progresses.

“Caroline Hall (Sophomore Libero), Addison Mills (Sophomore Middle Blocker), and Sarah Payne (Sophomore Defensive Specialist) are newcomers that have come along and made big impacts on this team,” Morris said. “They have made plays so far this year that have been crucial to our game success. We really have had the whole team step up or stand out for this year. They have all stepped into new or familiar roles that have helped lead the team to success this year.”

Defensively the Lady Raiders have been led by Hall’s 308 digs on the season, while Howard and senior Abby Payne follow close behind at 219 and 204. This has been a strong point for Trinity this season, as they’ve proven to be a pest and prolong volleys to come out on top.

“One of our biggest strengths this year has been our defense,” Morris said. “We are quick off our feet and are extremely scrappy with bringing balls back. Something that I would like to see in the latter half of the season from my girls is to continue playing team ball and to compete each time we hit the floor.”

With hopes of earning another historic season, Morris and company have founded themselves on self-confidence and enjoying the game. Along with that and a willingness to fight game in and game out, the Lady Raiders have shown they’re poised for another shot at a 3rd Region Championship.

“This year we have been behind two things—believing in yourselves and having fun,” Morris said. “Being one of the smallest schools in the region, it can be hard sometimes mentally when playing the bigger schools. However, I have a squad that loves competition and wants to strive to be the best. The girls like to think about what they have amongst themselves instead of what other schools bring.”