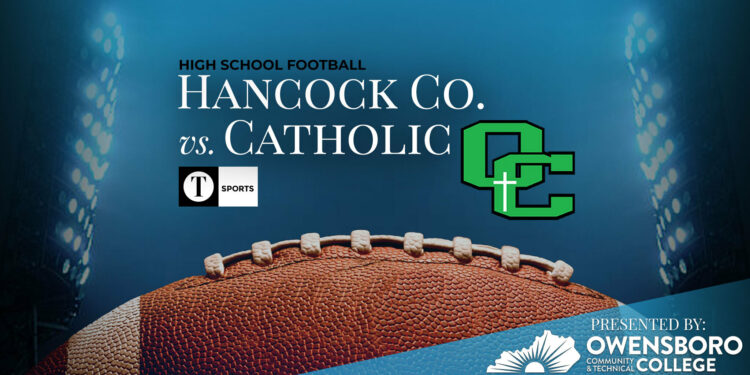 The Aces will face their third straight tough challenge in a row this week, as they will look to bounce back from a loss to Christian Academy-Louisville when they face undefeated Hancock County on the road in week six.

Owensboro Catholic suffered a tough 52-15 road loss to Christian Academy-Louisville last Friday, struggling on both sides of the ball on the road. Sophomore quarterback threw for 181 yards and two touchdowns on 11-21 passing in that game, but had a pair of interceptions while sophomore Lucas Gorman had one as well.

Despite forcing two fumbles in the game as well, the Aces weren’t able to silence the Centurions offense either. Owensboro Catholic allowed 300 passing yards and 193 rushing yards in that game, something they’ll look to shore up this week.

They’ll be facing a Hornets team that has a knack for finding the endzone as well, as they have scored over 40 in four of their first five games. They are led by senior Cole Dixon, who averages 146 passing yards and two passing touchdowns per game.

Morris said that they will have to focus on limiting him, as he said that Dixon is accurate and adept at making plays on his feet. They will also have to contain senior Logan Willis out of the backfield, running for about 74 yards per game.

With that in mind the Aces are focusing on playing aggressive but clean defense in practice, as well as taking care of the ball themselves on the offensive side of things.

“Our biggest focus is practice is going to be on ball security and tackling,” Morris said. “We will need to take care of the football and score on every red zone opportunity.”

Owensboro Catholic won’t have an easy one on Friday at 7 p.m., as the Hornets are a hard-nosed senior-heavy team that will fight to the final second. However, Morris and company believe that they can come away with a big road win as they improve their blocking, receiving and tackling while staying mentally sharp on the gridiron this week.

“We are expecting a great high school environment at Hancock County. It should be a really good game…We will need to make sure we are ready for the crowd and emotions of this game.”