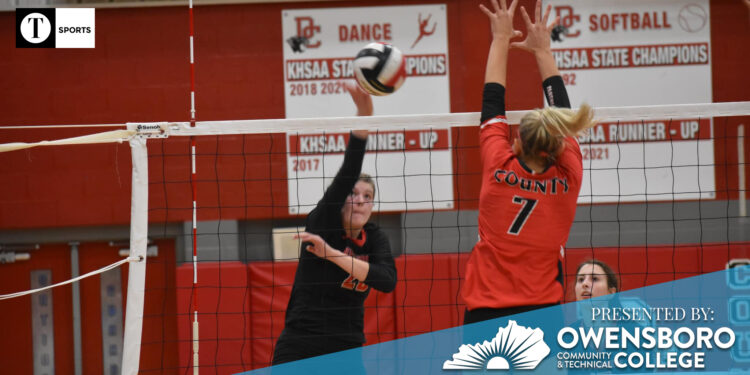 The Lady Panthers looked to set the tone of the match early, jumping out to a 14-5 lead in the first set. Daviess County continued to pour it on, eventually grabbing the set 25-12 after a string of aces by senior Adylan Ayer.

However, Owensboro came out swinging in the second set. The Lady Devils went up 11-8 thanks to solid placement of some kills, but a pair of kills by Ayer and senior Josie Newcom cut it to 11-10.

Owensboro had the answer though, staying the course defensively and building a 19-14 lead. The Lady Panthers attempted to climb back and sneak away with the set, but the Lady Devils held on 25-21 with a nice kill from senior Brooklyn Williams to close it out.

Owensboro didn’t have the same level of precision in the third set though, as Daviess County took back over.

Senior Mary Grayce Hill started the set out with a bang, grabbing four straight aces to give the Lady Panthers a 6-1 lead. The Lady Devils were never able to gather any momentum in the set, as Daviess County went on to close a 25-9 win with back-to-back aces from senior Emma Rogers.

But Owensboro was able to flip the script again in the fourth set, forming a big comeback win. Trailing 6-3 early, a 4-0 run gave the Lady Devils an early 7-6 lead.

The Lady Panthers tied it with the next point thanks to a serving error, but Owensboro built its lead back to 12-8. The two continued to trade points throughout the set, with Daviess County refusing to go away and tying the Lady Devils at 20-20.

However, a quick 4-0 run shifted momentum once again in Owensboro’s favor, going on to force a fifth set with a 25-21 win.

The Lady Devils carried their rhythm into the fifth set, grabbing the first point and slowly building a 7-4 lead. Owensboro grew its lead to 9-5, but back-to-back points by the Lady Panthers cut it to 9-7 and forced a timeout.

The Lady Devils came out of the timeout on fire, grabbing three straight to take a 12-7 lead. A few kills by Ayer led Daviess County to make it 12-9, but a block by Owensboro gave them the momentum they needed to close out the fifth set 15-11 and win the match 3-2.

“It’s a big district matchup and it’s always going to be full of energy on both sides,” Head Coach Melissa Hibbs said. “Daviess County is one the toughest opponents in the 3rd Region and we knew we had to bring our A-game. There were a couple of sets where we got let down, but they fought. The girls fought and played hard and we came out on top tonight.”

With a number of timeouts late in the game, Hibbs said self-belief and confidence was the message in the forefront of the Lady Devils’ minds as they looked to pull off the big comeback win.

“We’ve been in games and we’ve continued to fight, but we just haven’t been able to get over the hump,” Hibbs said. “We’ve been in that situation this year… We knew that the third set [loss] was [because of] unforced errors. Our serve-receive was way inconsistent. To give them credit, they served us hard and we just needed to step up.”

Williams was one of those players that stood out for the Red Devils, leading the offense with 15 of the team’s 39 kills. Hibbs said that she was well prepared for this match, as she played strategically well to make an impact against the Lady Panthers.

“We’ve been working on a couple things with her, like what’s her best hits and all that stuff,” Hibbs said. “I think she made some really good decisions about what hits she wanted to call and the setters just put it in her hand. She needed a game like this and she came up big for us. Tonight she was definitely a game changer.”

“We have known we were a strong team all season and if you look at our record you wouldn’t think that,” Hibbs said. “We just keep telling ourselves that we can compete with anybody and in those huddles they were like ‘we can do this. We’re a team and if we play as a team we’re going to win this.’ We played as a team. There were not six individuals out there. Every single person had to [come to] play tonight and that made the difference.”

The win is not only a big feat given that the program hasn’t defeated them in eight years, it gives the Lady Devils their first win in over a month. Hibbs thinks this can be a big turning point for them going forward if they focus on the big picture following the win.

“It’s definitely a great momentum shift,” Hibbs said. “We needed a dub, but we know our work is not done. We’re back at the grind tomorrow morning and we have another big district game next week. So although this is great and we’re going to celebrate the win, this isn’t the overall picture. We just want to build from this and be ready come October.”

Daviess County fought valiantly as well with some potent offense when they were clicking, getting 27 service aces with six each from Rogers, senior Taylor Roberts and Hill. Newcom also chipped in 20 of the team’s 42 kills, while Owen assisted on 37 of them.

Roberts and Owen were the only players in double figures in digs with 15 and 10 respectively. Head Coach Tyla Bailey felt like the Lady Panthers beat themselves on Thursday, not sticking true to themselves despite some bright spots.

Daviess County falls to 12-9 overall and 3-1 in district play with the loss, as Bailey and company now look ahead to the weekend and aim to put the home defeat in the back of their minds.

“Resetting, regrouping [will be key],” Bailey said. “It’s sports like we’ve talked about. It’s a game of momentum. We’ll come in and practice tomorrow and then we’ll play some pretty strong teams over the weekend at Castle. We’re not dwelling on it. It is what it is, but we’re definitely going to see what we need to do differently and work on it and go from there.”

Owensboro on the other hand improves to 5-13 overall and 1-4 in district play, looking to carry this momentum into a home matchup with Hancock County at 6:30 p.m. on Monday.