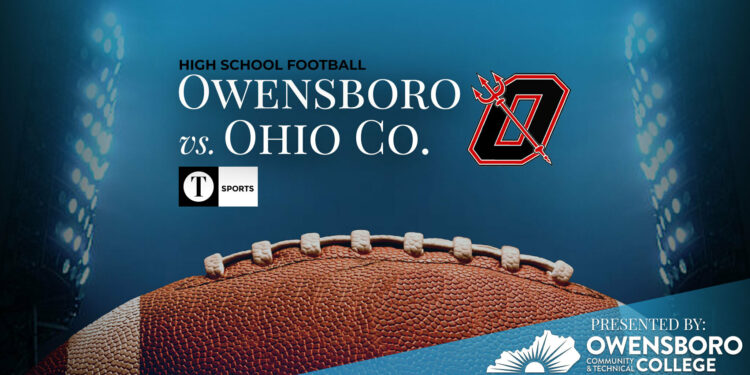 Coming off of a dominant display on both sides of the ball last week, Owensboro football is looking to ride that momentum into a win against Ohio County this Friday.

The Red Devils are coming off of a dominant win over Breckinridge County, in which they scored over 50 points for the second time this season. Senior quarterback Kasey Boone was perfect on the night passing, going 5-5 for 90 yards and two touchdowns with Pendleton grabbing the two touchdowns and 52 total yards receiving as well.

Carbon led the way out of the backfield with 102 rushing yards and three touchdowns on four carries, while Winstead and DeLacey both had rushing touchdowns as well. Defensively junior Javion Robinson led the way, grabbing two picks in the game.

Head Coach Jay Fallin was pleased with their efforts last week, but knows that they will have to keep it up in week six in order to improve and get a win against the Eagles.

“Continued improvement [is what we want to see],” Fallin said. “We were efficient in all three phases against Breckinridge County, and we need to continue that efficiency and improvement this week.”

Owensboro will be tasked with facing an Ohio County team that is in high spirits, as it grabbed its first win of the season over Muhlenberg County last week 35-13. They will look to stifle an offense spearheaded by senior running back Matthew Smith, who averages 130 rushing yards per game.

Fallin said they will have to know where he is at all times, as he runs hard and does a great job of finding lanes for big gains. They’ll also look to control field position, as Fallin said that Ohio County has a reliable kicker in senior Brett Hoskins.

The Red Devils played strong against Breckinridge County, but he doesn’t want his team to be complacent and hasn’t lowered the expectations this week.

“[Our expectations are] the same as every week—avoid beating ourselves with costly turnovers and penalties and execute…” Fallin said. “We have to focus on each individual play and try as hard as possible to execute our assignment, play in and play out.”

In order to top a well-coached hard-nosed football team that will come to play hard for 48 minutes, Fallin said that they have to improve at every position every week in all three phases.  Owensboro believes that continually improving in hard fought games will best get them ready to compete in the playoffs, something they’ll keep in mind when they are under the Friday night lights against the Eagles at home at 7 p.m.