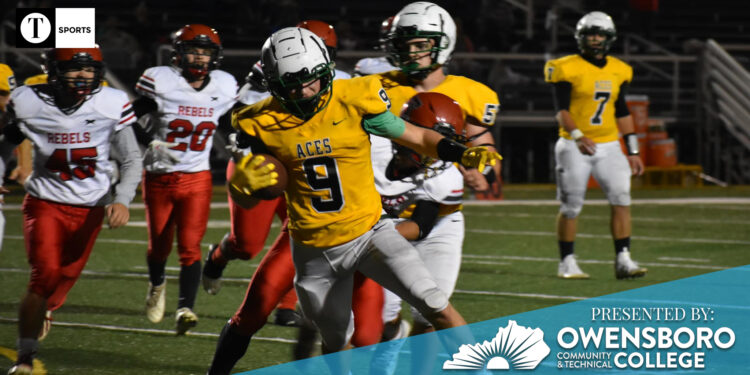 Tutt Carrico and Brady Atwell were on fire offensively on Friday night, leading a strong first-half attack at home en route to a 47-36 district win over Todd County Central.

It took less than a minute for the Aces to set the tone for the game, as sophomore quarterback Brady Atwell found junior Tutt Carrico for a 36-yard touchdown pass to make it 7-0. The two connected again about halfway through the quarter, this time for a 32-yard touchdown and a 13-0 lead with 6:42 to go in the first.

Sophomore Vince Carrico got in on the action after another scoreless drive by the Rebels, using a four-yard touchdown run to take a 20-0 lead with 2:59 left in the first. Senior Gavyn Nolan put Todd County Central on the board with two minutes left in the quarter on a three-yard keeper to make it 20-6, but Owensboro Catholic kept on chugging to start the second.

It was Atwell and Tutt connecting for their third touchdown of the game on 3rd and 17 that did the trick, as Brady lofted the ball to the junior wideout and took it to the crib for a 90-yard touchdown and a 27-6 lead. The duo continued to stay hot to close out the first half, getting a 17-yard touchdown to make it 34-6 with 5:37 left in the first half.

Following a turnover on downs by the Rebels, Owensboro Catholic added another score as Atwell hit senior Tanner Roberts to take a 40-6 lead after a failed two-point conversion with 2:57 left in the second quarter. The Aces wrapped up the first half with a bang, finding themselves at the one as sophomore Waryn Ebelhar took a knee with 30 seconds to go in the first half to set up a big touchdown.

4’8 freshman Eric ‘Chapo’ McCarthy proceeded to check into the game much to the players and Aces fans in the stands, taking the handoff and scoring a touchdown to make it 47-6 Owensboro Catholic going into halftime.

The Aces didn’t have nearly as strong of a second half, giving up a few touchdowns while surrendering a fumble and an onside kick to allow Todd County Central to cut it to 47-28 with 5:14 left in the fourth. Following an interception the Rebels would find the endzone one more time to make it 47-36, but it was too little too late as Owensboro Catholic closed out the home win.

While the second half didn’t go exactly as the Aces had planned, Head Coach Jason Morris was thrilled with their effort in the first half and was proud to come out on top for another district win.

“Just proud of the way we came out in the first half and took care of business,” Morris said. “We got our JV teams and freshman team a lot of reps in the second half and were able to come out with a win.”

Defensively Owensboro Catholic was firing on all cylinders in the first half, allowing the lone touchdown going into the locker room to help them build a 31-point lead going into halftime.

“We just came out and we gave up a couple long runs, but other than that we pretty well stuffed their run game…” Morris said. “We got in and got the running clock and did what we wanted to do.”

Atwell and Tutt connected for four touchdowns in the first half, leading the offense for the second straight week. Morris said the two continue to become stronger week after week, with both putting in plenty of work to be as efficient as possible.

Tutt becoming a threat to put up multiple touchdowns has helped free up space for other wide receivers and running backs to have big games as well, something that Morris and company hope to continue to build on as the season progresses.

“We caught the post overtop with Kaiser where a safety was playing over top with Tutt,” Morris said. “Blair catches some big balls where the safety is playing over top of Tutt and we hit some screens opposite of Tutt. Any time someone starts keying on one of our players our whole offense opens up.”

The Aces improve to 4-3 overall and 2-0 in district play following the win, as they will hit the road for their next district matchup on Thursday, Oct. 6, to take on Butler County.