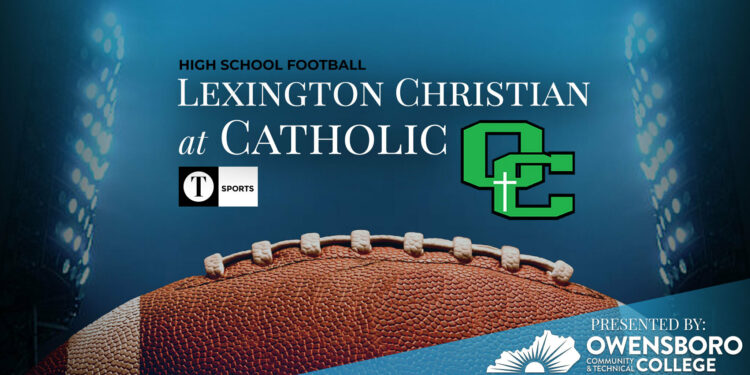 Owensboro Catholic will look to stay hot and grab its eighth straight victory on Friday, as they are set for an all-out gridiron battle of a third-round postseason rematch with Lexington Christian in front of their home crowd.

The Aces are coming off of a strong performance last week, with their largest lead of the game reaching 47-14 before taking out the starters. Sophomore quarterback Brady Atwell led the charge in week two of the postseason, throwing for 233 yards and three touchdowns on 15-17 passing while rushing for a touchdown as well.

Atwell spread the ball around well as they defeated McLean County for the second time this year, getting a receiving touchdown each from sophomore Waryn Ebelhar, junior Deuce Sims and junior Tutt Carrico. Multiple players got in on the action out of the backfield as well, as freshman Miles Edge, sophomore Vince Carrico and senior Jack Terry all had a rushing touchdown each.

Head Coach Jason Morris and company knows they will have to be sharp offensively to come out on top against a strong opponent, so they’ve been working hard on fundamentals and taking what the defense gives them in practice this week.

“We expect to play a very good game in an electric environment at home,” Morris said. “Lexington Christian is very sound on defense and also spreads the ball around on offense.”

In knowing how balanced of an offense that the Eagles have, they’ve also focused on tackling and execution in practice. Owensboro Catholic will hope to limit Lexington Christian’s junior quarterback in Cutter Boley, as he is at the forefront of the offense with an average of 300 passing yards and three touchdowns per game.

The Aces will have an array of running backs that they’ll have to contain as well with seven different players recording a rushing touchdown this season—not counting Boley— including J’Veontae Emerson, Mac Darland, B Evans, Saxton Howard, Alex Rayyan, Parker Chaney and Will Nichols.

Morris said that it’s imperative that they don’t single out one person because of the amount of talent Lexington Christian has on their roster, noting that they can’t have any mental breakdowns if they want to come away victorious.

“We have to make LCA drive the football every possession,” Morris said. “We can’t give them easy points… The best way to limit a potent offense is to take well in space and play sound defensively. We can’t let their shifts, motions, and gimmick plays confuse us.”

These two teams met in the third round of the postseason in 2021, with the Eagles pulling away late for a 49-21 win before eventually falling to Beechwood in the state championship. Morris and company were amped up following last week’s win, knowing that they’ve had revenge on the brain since losing to Lexington Christian last season.

“This is a game that we’ve been waiting for since we got beat in the third round last year,” Morris said. “We’re set up to play at home, we’ve got everything we want, and we can’t wait. There was about a 5-6 minute period there in the third quarter (against LCA last year) that we kind of imploded. You take that away and we went nose and nose with each other.”

Morris went on following the home victory over McLean County, saying that the hard work they’ve put in all season has led to this. And this time around, the Aces believe that the outcome won’t be the same as a year ago.

“I just feel like our team’s ready,” Morris said. “We’ve built this year and this season for this game. We thought we had a good game and we fell apart in the second half last year, but this year I don’t think that’s gonna happen. I think it’s gonna definitely be a different turnout.”