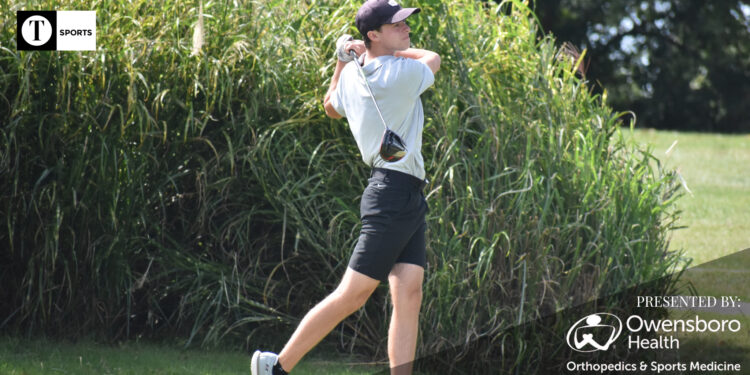 Following a pair of impressive seasons in 2022, Daviess County’s Grant Broughton was named the 2nd Region Player of the Year while teammate Dawson Lamb joined him on the First Team All-2nd Region.

Broughton picked up where he left off this year following a strong freshman season, qualifying for state for the second year in a row. He finished the state tournament placing 33rd, shooting a 155 (+11).

While Broughton may not have placed as high as he would’ve liked at state, Head Coach Lars King was proud of Grant’s ability to deliver on the links for the Panthers time and time again this year.

“Grant had a great season,” King said. “Multiple wins and being able to advance all the way to the state tournament again speaks volumes about how truly talented he is. His honor was well deserved, and represented how well he played this year.”

Broughton himself is thrilled to find himself in talented company amongst the 2nd Region, while earning 2nd Region Player of the Year for the first time while noting that going forward he’s looking to continue to rack up the accolades.

Broughton made sure to give credit to his teammates and coaches while acknowledging the POTY award, saying that spending time with them on and off the course is what has helped him be so successful.

“Every season I love traveling with my team and practicing each day with the goal of getting better every time,” Broughton said. “This season I was able to have the success that I had by putting in work everyday and always staying motivated to get better. I would love to thank my teammates and coach for being with me all year, and my family and friends for always coming out and supporting me at tournaments.”

Lamb shared a similar notion, saying that his countless hours of work in the off-season paired with help from his parents and coaches were key to his success this year.

“All the practice and help from my coaches and parents have made me into the golfer I am today,” Lamb said. “I wouldn’t be able to play at this level without their help. This year in the offseason I worked on my swing a considerable amount. Focusing more on the smaller mechanics of the swing. This allowed my golf swing to be much more consistent.”

King said that Dawson’s senior season was definitely a product of the effort he put in during the offseason and that he’s beyond deserving of the accolade.

“Dawson is a great player in his own right,” King said. “His work ethic this season was unmatched. He didn’t finish the postseason how he would want to, but the honor of first team is well deserved and couldn’t have been awarded to a better player and person.”

Lamb said that knowing he performed at the highest level in the region and was selected as one of the top golfers means a lot to him, especially in his final season at Daviess County.

“To do this in my senior season means a lot,” Lamb said. “I put in a lot of work before the season started and during the season, to be able to do as well as possible knowing it was my last year, and getting this award lets me know how all that work paid off.”

Lamb went on to thank his parents and his swing coach Charles Whelan for helping him be the best he can be, while making sure he enjoyed every second of the game. He included King and all of his teammates he’s had as a Panther, noting that he will always cherish his time with the golf program.

“Daviess County golf has meant a lot to me,” Lamb said. “I have made many friends through the golf team and Coach King has always been a great coach. Coach and the team always pushed me to get better and pushed me to be my very best.”