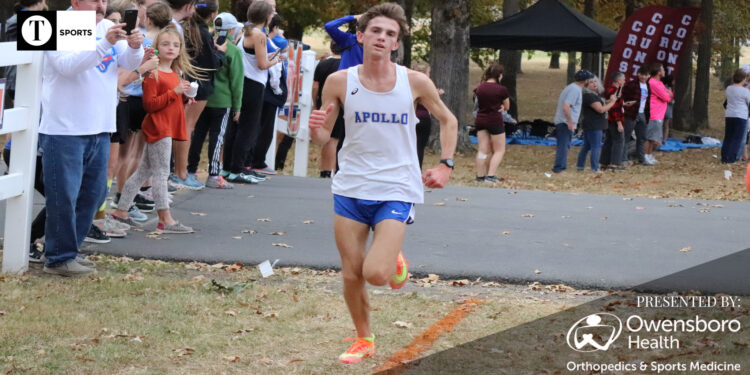 Following another strong season for Thomas Ashby where the senior Apollo runner was one of the best that the Commonwealth has to offer, he has been named the Owensboro Times Cross Country Player of the Year for the second consecutive season.

Ashby put a nice bow on his Eagles career with his performance in his senior season, running a time of 15:54.35 to help them grab a First Region Championship and eventually finishing fourth individually (15:47.70) to get the team a fourth-place finish (16:56.28) at state. Thomas was happy with his running ability this season, thrilled to have accomplished multiple goals he had set coming into the year.

“I’m happy with it,” Ashby said. “It was my best season ever and I’m glad my last high school season was a successful one… It means a lot [to receive the award]. I’m very grateful to receive it and I’ll use it as motivation for future success in collegiate running.”

Ashby said that this was Apollo’s first super strong team in a while, with the goal of getting to podium on state to go along with individual goals of competing for a state title and winning races. He’s proud of the way the Eagles ran, while noting that he’ll never forget this season and that Apollo Cross Country has meant everything to him.

“The memories I’ve made with teammates, friends, and coaches is what I will remember most,” Ashby said. “For me, the best part about running isn’t the achievement and smashing goals. It’s the hundreds of amazing people I’ve met along the way. Many of which I’m friends with still.”

Much like Apollo Head Coach Charlie Shoulta expressed following the state race, Ashby’s work ethic is what sets him apart from the pack. Ashby agrees with the sentiment, saying that his hard work in the offseason and will to win were the keys to his success in his senior year.

“Consistency of training and an unbreakable mindset while racing,” Ashby said. “Since last fall I’ve improved a lot in those areas. My competition also was the driving factor for my improvement as well. I always want to win and if I don’t, I work harder to win next time.

Now Ashby will prepare himself to compete at the collegiate level, running for the University of Cincinnati while studying mechanical engineering following graduation. But before he does that, Ashby made sure to thank all of the people that have helped him become the athlete that he is today.

“I’d like to thank my parents, coaches, and teammates,” Ashby said. “My parents support me greatly with health and staying focused. My coaches (Charlie Shoulta & Daniel Southard) are the geniuses behind all the training that’s made Apollo such a great XC team this year. My teammates are some of my biggest supporters too. They’re always there cheering me on as well as training alongside me.”