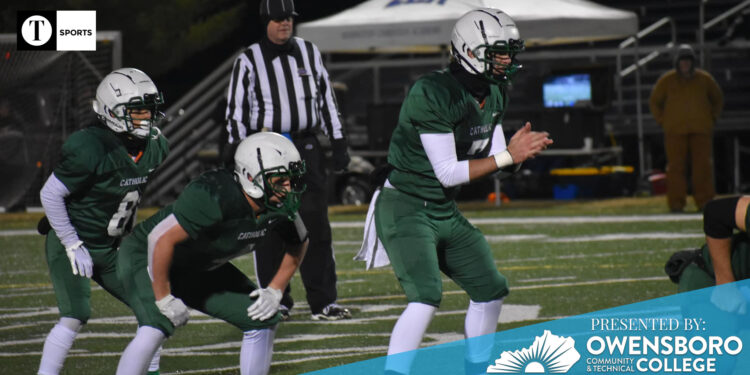 The Aces gave themselves a chance for the win with less than five seconds to go, but the final pass fell incomplete as time expired and they ultimately fell in the third round of the postseason to Lexington Christian 33-27 for the second straight year.

Owensboro Catholic got a little help from the Eagles to start, drawing two flags for 10 yards before even getting one snap off. Tutt Carrico kickstarted the night on their first play of the night with a 25-yard carry, while it was his brother Vince who bowled his way into the endzone after Brady Atwell rolled out to his right and hit him for the touchdown.

After the made PAT by senior Doninic Ranallo, the Aces had a 7-0 lead with 9:12 left in the first quarter. Lexington Christian didn’t have much better luck to start their drive, opening the game up offensively with a holding penalty.

This set the tone for Owensboro Catholic defensively, as they proceeded to stifle the Eagles and take over at the 47 following a punt. The Aces weren’t able to capitalize though, eventually missing a 28-yard field goal.

This allowed Lexington Christian to work its way towards some momentum with a score, getting upfield quickly with a few big passing plays. Facing third and five to start the second quarter at the 35, Owensboro Catholic gave them a fresh set of downs by getting caught offsides.

The Eagles weren’t able to take advantage of the Aces misfortune, as a tough drop kept them conveying on fourth down. But Owensboro Catholic turned it over on the very next play, giving the Eagles a big scoring chance with an interception to start at the 38 down 7-0 with 10:15 to go in the second quarter.

However, Atwell quickly made up for it a few plays later by picking off a Lexington Christian pass, putting them at the 26 up 7-0 with 8:40 left in the first half. But the Aces couldn’t get anything going on the next drive either, allowing another interception from Atwell facing 3rd and 15 at the 22 later in the drive after a personal foul.

Owensboro Catholic’s defense had the answer once again, as Tutt Carrico got a pick six the very next play. Following the extra point from Ranallo, the Aces took a 14-0 lead with 5:23 left in the first half.

Lexington Christian wasn’t going away though, working themselves to a first and goal at the eight with a 20-yard keeper from Cutter Boley with two minutes to go in the quarter. The Eagles proceeded to get a touchdown shortly after, but a holding call took them back to the 19.

This didn’t deter Lexington Christian though, as Boley completed a 14-yard pass to put them at the five for fourth down with less than 30 seconds to go before hitting Will Rich the ensuing play to get on the board. Following the made PAT both teams headed to the locker room for halftime, as the Eagles had cut Owensboro Catholic’s lead to 14-7.

Lexington Christian came out of halftime looking to grab some momentum offensively, methodically gaining yardage on the first drive of the second half. A tough pass interference call on Owensboro Catholic set the Eagles up well, moving them to the 45 less than a minute into the third.

Later in the drive Boley continued his strong play, using a draw play to dash to the three-yard line for first and goal. The Aces were able to force third and goal at one and then sent Lexington Christian back to the six after a false start.

The Eagles didn’t bow out though, as Boley hit Will Nichols on the very next play for a touchdown. The PAT was made shortly after, knotting things up at 14-14 with 7:33 left in the third quarter.

After stifling Owensboro Catholic on the ensuing drive, Lexington Christian looked to grab its first lead of the night. Flags continued to derail them offensively though, as a holding and an illegal substitution made it 3rd and 20 at the 36 with 5:13 left in the quarter.

The Eagles tried some trickery with a lateral to get the first after a completed pass, but it was bobbled and the Aces quickly pounced on it to take over at the 49. Owensboro Catholic couldn’t hang onto possession though, fumbling after getting a first down to put Lexington Christian back on offense.

The Eagles proceeded to move upfield quickly, getting to the 37 on a couple of pass plays before a facemask penalty on the Aces put them at the nine for first and goal with two minutes left in the third. Boley went on to cap off the drive with a two-yard keeper, as the PAT made it 21-14—giving Lexington Christian their first lead of the night with 1:14 left in the third quarter.

Owensboro Catholic took possession into the fourth quarter, starting out at the 46 for second and four. Later facing third down, the Aces converted for the first and quickly wound up at the eight following an 18-yard carry by Tutt.

Atwell—continuing to play through injury—took a keeper into the endzone the very next play. Ranallo drilled the extra point, knotting things back up at 21-21 with 10:03 to go.

The Eagles didn’t waste much time getting going offensively though, eventually using a 39-yard bomb from Boley to senior Evan Brown to put them at the 11. For the second time on the night, Boley ended up taking into the endzone himself a few plays later from the three.

The extra point was shanked wide left however, leaving it at a 27-21 lead for Lexington Christian with 7:52 to play. Owensboro Catholic tried to bounce back quickly, but found themselves facing fourth and six at the 20 with 6:44 to go.

Atwell proceeded to get hit as he tried to get a pass off and it fell incomplete, giving the Eagles the ball at the 20. After a 16-yard carry and a four-yarder into the endzone on the next two plays from senior J’Veontae Emerson, Lexington Christian had a 33-21 lead with 6:04 to go thanks to a failed two-point conversion.

This proved to be a big moment in the night, but Head Coach Jason Morris said following the game that given their struggles they knew they needed to try and take control of the game with a big play so they went for it.

“I knew we were having trouble stopping them and I wanted to put together a drive that could go win a game,“ Morris said. “So we felt like at that point we needed to go for it and make that the drive to go win it.”

And Owensboro Catholic didn’t give up, getting a nice return from junior Noah Rhinerson to start the drive at the 32. On third and eight Atwell was able to find sophomore Waryn Eblehar, who took a big hit but hung on to give the Aces a new set of downs at the 11.

A couple plays later and Atwell pitched it to Vince who ran it in at the one, cutting their deficit to 33-27 with 3:55 to go after a fake extra point failed. Owensboro Catholic was able to stay hot as they turned things on defensively in the next drive, forcing Lexington Christian to punt and give the Aces the ball at the 10 down 33-27 with just under two minutes to play.

Atwell connected with Ebelhar and junior Deuce Sims to quickly move to the 45, but it was the next pass to Sims that put them on the 13 thanks to a acrobatic grab down the sideline. Owensboro Catholic went on to give themselves one last chance to tie the game as the clock started to diminish, with them spiking the ball at the three-yard line after getting a first down to leave 3.4 seconds to play.

With the Aces looking to force overtime Atwell rolled out to his right, but was unable to connect with Vince Carrico and the final horn sounded to signal the end of Owensboro Catholic’s season with a 33-27 loss to the Eagles. Despite the end result, Morris was more than proud of his team’s fight that helped them have a chance to grab another playoff win late.

“I’m just so proud of them because we easily could’ve laid down when we got down two scores there,” Morris said. “We came back from the four-yard line with one more play to go and gave ourselves a chance to win, but we came up an inch short there.”

Morris said that in the second half it was Lexington Christian’s ability to win the possession time battle that helped them succeed late, making it hard for them to get much going offensively despite doing well in that facet of the game throughout the night.

“We were prepared for everything they could do to us,” Morris said. “Once they started keeping the ball more and our defense stayed on the field over and over, we had a couple bad offensive series there where we kind of self-destructed… Besides that we pretty much moved the ball on every single possession we had.”

The Aces gave it their all, even having players like Atwell—who was injured in the first half—play through injuries in hopes of grabbing a regional title for their first time since 2010. While falling just shy of doing so, Morris made sure to give credit to his quarterback that plays both sides of the ball for his efforts.

“He got hurt early, but he’s a warrior,” Morris said. “He’s the best quarterback in the state and I’ll argue that with anybody, and he’s just a sophomore. Brady Atwell’s a special kid who fought back all night long.”

While Morris is making no excuses for the loss to Lexington Christian, he said after the game that he feels as though that the current playoff format is bringing some very tough games too early in the postseason and that this contest was no exception.

Owensboro Catholic finishes the season with a 9-4 overall record, having used a seven-game winning streak to earn a winning record and have a chance at a regional championship for the first time in over a decade. Morris said after the game that he’s thrilled with how they played this season and is thankful for the seniors’ leadership in taking the program to new heights.

“It was a great season,” Morris said. “I’m super proud of my senior class. They have nothing to be ashamed of. Whether or not we advance to the next round or not is irrelevant, because we took this program to another level this year… Our program is in really good shape because of the senior class and how much hard work they put in.”

Now Owensboro Catholic heads into the offseason, where Morris says that they have to stay united. If they can do that and come back with the goal in mind to find themselves in this same game a year from now, the Aces feel like the program can continue to make even more progress.