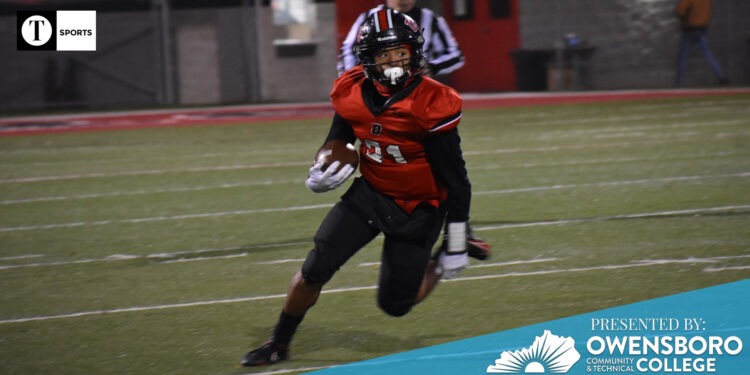 The Owensboro football program was firing on all cylinders Friday night, defeating Louisville Fairdale 36-0 in the third round of the KHSAA Playoffs. With the victory, the Red Devils secured their 4th consecutive regional championship.

Coming off a hard-fought win against Greenwood on Friday night in the second round of the playoffs, head coach Jay Fallin said his team entered the contest focused. Fairdale (11-2) entered the game with only one loss, but they had no answer for Owensboro’s (11-2) pressure defense.

“We thought we were going to be able to take advantage of some of the things they were going to do from a schematic standpoint,” Fallin said. “We knew that would allow us to move the ball on offense. It came down to executing and making plays, and our kids definitely did.”

Owensboro’s success was the direct result of a vigorous defense and an explosive offense. The Red Devils’ defense kept the Bulldog’s offense at bay, forcing two turnovers and pressuring the backfield all night.

“We knew they were big and athletic enough to have some first downs, and we just had to keep fighting,” he said. “We felt like if we could make them keep snapping, they would eventually make a mistake, and we could produce a negative play.”

Fallin added that his seniors had played a pivotal role in the defense’s season-long success.

“We knew our defense would be our calling card with a bunch of seniors on that side of the ball and a ton of experience,” he said. “When you’re good up front on defense and experienced, you can create many problems for people who just can’t block you.”

On the offensive side of the ball, Owensboro relied heavily on its run game, tallying four rushing touchdowns. They added one in the air, converting just enough passing plays to keep Fairdale’s defense on its toes.

“Most of our big long plays came out of play action in the vertical passing game,” Fallin said. “They’re an aggressive run defense team, and we knew we could take advantage of that with our wide zone plays.”

Owensboro won the toss and deferred to the Bulldogs before forcing an interception less than two minutes into the game. They quickly advanced the ball, reaching the 29 for a first-and-10 with 7:58 left in the first quarter.

Owensboro’s defense kept the pedal to the metal, forcing multiple sacks and setting up the second turnover of the evening. Javion Robinson grabbed his fourth interception of the evening, and it was a doozy – a breadbasket catch running away from the ball.

With less than two minutes left in the half, the Red Devils capitalized on the excellent field position and marched to the red zone. With 1:37 remaining, Kasey Boone connected with Ethan Pendleton on an 8-yard fade route to the back of the end zone to secure a 21-0 lead entering the half.

Looking to create some momentum, Fairdale opened the second half by recovering an on-side kick on the Red Devil’s 45-yard line. The Bulldogs went for it on fourth and one and converted a botched snap into a first down before eventually punting after penalties pushed them back into their own territory.

The Red Devils wasted no time responding as Goodwin broke a tackle from 82 yards out and marched it down the sideline for a touchdown.

Owensboro converted again with 7:48 left in the final frame on a 1-yard touchdown run by Carbon. They followed with a successful 2-point conversion to take a 36-point lead and force a running clock.

“This makes four straight regional championships, four straight trips to the semi-finals, and we’re excited to be playing next Friday,” Fallin said.

Fallin and company live for Thanksgiving Day practices because that means they’re only that much closer to the ultimate goal: a state championship. They’ll continue that pursuit next Friday when they take on Frederick Douglas in Lexington.