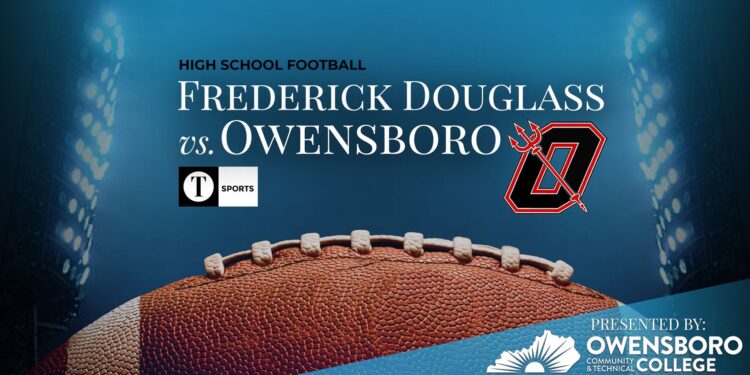 The Red Devils’ hunt for a state title continues on Friday, as they head to Lexington to take on Frederick Douglass in a rematch of last season’s Class 5A state semifinals.

Following last year’s 35-7 loss Owensboro is looking to turn it around to make it to the state championship, and the Red Devils know coming into the game that they will have to be ready mentally and physically all night long.

“It’s a state semifinal, so we are expecting a highly-competitive, four-quarter battle,” Head Coach Jay Fallin said. “The team that executes the game plan and limits their mistakes while taking advantage of the opponent’s mistakes will win.”

Riding a nine-game winning streak, Owensboro is coming off of a dominant 36-0 win over Fairdale for a fourth straight regional title. Seniors Jeremiah Goodwin (132 rushing yards, eight carries) and Kenyatta Carbon (104 rushing yards, 16 carries) were on fire offensively that night, combining for 236 rushing yards and two touchdowns each.

Senior Kasey Boone also had a solid game under center, throwing for 158 passing yards and one touchdown on 11-19 passing. Fellow seniors Ethan Pendleton and Khalil Rogers were his primary targets, both earning 66 receiving yards while Pendleton caught the lone passing touchdown.

Against a solid team with so many weapons on both sides of the ball, Fallin knows that they will have their work cut out for them this week. Nonetheless against a defense that hasn’t allowed more than 13 points all season.

“Douglass is one of the top programs in the state,” Fallin said. “They are talented, big, fast, athletic and well-coached at every position… We have to execute and connect on the shots and chances we will take when they present themselves.”

Handling Frederick Douglass will be no easy task either, as they have scored at least 30 points in all but one game this season. They are led by junior quarterback Cole Carpenter, who’s averaging nearly two passing touchdowns and 135 passing yards per game while throwing just three interceptions on the year.

The Broncos also have a strong backfield, with the trio of TJ Horton, Davaun Hart and Ty Bryant average a touchdown a game. Horton leads the way with 53 yards per game, while Hart averages 42 and Bryant averages 29.

Knowing that they will have plenty of options offensively, Fallin said that Assignment and alignment, pre-snap communication, and all-out effort every single play in all three phases have been the main focus in practice this week.

“We will have to know and understand the game plan and our individual assignments on each and every play, understand that alignment is key, communicate pre snap and play as hard as we can every single play,” Fallin said.

The Red Devils will look to close the gap and make it to the Class 5A state title game on Friday, prepared to be on the side of things this time against Frederick Douglass at 6 p.m. in Lexington.