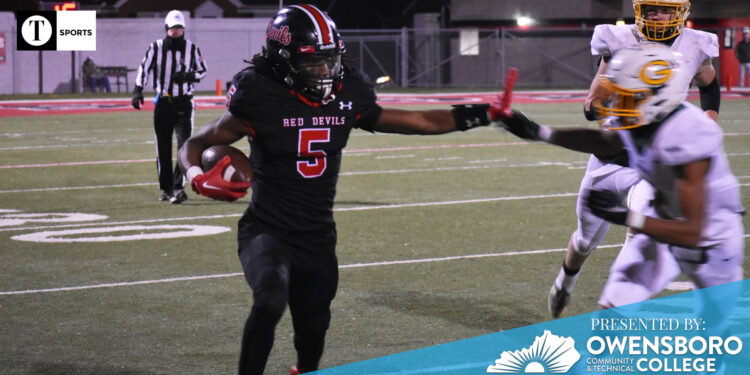 Owensboro made countless big plays and stops defensively when they needed it most, battling their way to a 27-21 win at home to fend off Greenwood and advance to the third round of the 5A Playoffs.

Despite a nice run by senior Kenyatta Carbon on the Red Devils first play of the game, the offense got off to a slow start. Senior quarterback Kasey Boone couldn’t connect with senior Khalil Rogers on his first passing attempt, with the second not being much better as senior Lofton Howard snagged the pass at the line and took it to the endzone for a 45-yard pick six.

Greenwood led 7-0 with 11:15 to go following the made PAT, with Owensboro starting the ensuing drive at the 29. The Red Devils were unable to get much going and quickly had to punt, but were able to down the ball at the one for the Gators.

This set Owensboro up for a nice defensive stand , leading Greenwood to punt. Carbon botched the punt but was able to fall on it, later making up for it with a nice run and drawing a face mask penalty that put them on the 25.

Freshman Evan Hampton’s number was called on the ensuing sweep play, taking it three yards for the touchdown. But the Gators were able to stay out in front by blocking the extra point, leading 7-6 with 2:06 left in the first.

Following a quick stop by Owensboro, Carbon was able to come through with a big play. The senior running back took the first snap of the drive down the right sideline 71 yards for a touchdown, as Boone proceeded to hit Rogers rolling out to his right for the two-point conversion and made it a 14-7 game with 52.2 seconds left in the opening quarter.

Greenwood started off the second quarter strong, getting a big run from junior Tel Tel Long to move them to the 26. A block in the back took them back to the 37, a roughing the passer call on 3rd and 21 later in the drive gave the Gators a first down with an unfortunate penalty for the Red Devils.

This led to a 12-yard touchdown carry for Howard, taking the handoff the next play for a two-point conversion and a 15-14 lead with 7:54 left in the first half. Owensboro proceeded to methodically move upfield, with a big fourth down conversion setting them up for a good scoring opportunity.

The Red Devils struggled during the next few plays after the offsides call had them at the 44, with a big hit for a loss of two by Howard making it 4th and 11. But upon taking the snap, senior Jeremiah Goodwin elected not to punt and it took it himself 54 yards to the house for a touchdown.

Owensboro couldn’t convert on the two-point conversion, but they had reclaimed the lead for the second time on the night at 20-15 with 2:57 left in the first half. The Gators tried to get one back just before halftime, finding themselves at the 30 following a 46-yard run by Howard with just under two minutes left in the first half.

Howard took a keeper to the 16 the very next play, but the Red Devils stood strong and forced Greenwood to take a field goal. Senior Drew Smothers was able to sink the 33-yarder, cutting Owensboro’s lead to 20-18 going into halftime.

The Gators came out of the locker room looking to control the game in the second, methodically using the ground game to move upfield. Long put them in good position at the 26 on one of his many touches on the drive with 6:35 left in the third, but a bad snap later on third and goal at the one and a flag moved the Gators all the way back to the 31.

Greenwood couldn’t convert, but a questionable pass interference on the Red Devils made it fourth and 21. This allowed Smothers to attempt a 38-yard field goal, but he couldn’t sink it and Owensboro took over on downs at the 21 with 4:21 left in the quarter.

The Red Devils took advantage of the ensuing drive, getting a 25-yard scramble by Boone to put them at the 39 with minutes to go in the third. Following another first down the Gators were able to force fourth and seventh at the 24, but some trickery from Owensboro helped them find the endzone once again.

This time it was an end around that caught Greenwood by surprise, as Boone handed it off to Carbon before Rogers received a handoff from his running back before taking it to the house for the touchdown. Senior Andrew Lanz sank the extra point, giving the Red Devils a 27-18 lead with 2.9 seconds left in the third.

But Owensboro wasn’t able to completely take momentum of the game, as the Gators ground fame continued to help them earn yards offensively. The Red Devils were able to limit them to a field goal, but Smothers drilled the 21-yarder to cut it to 27-21 with 8:03 to play.

Owensboro wasn’t able to get anything going offensively on their following drive, giving Greenwood one last chance to even up the score. The Gators were facing their final stand at 3rd and 10 with 1:53 to go, falling just short of a first down.

After it was measured and deemed fourth and inches, Greenwood took a timeout to devise a plan to get the first down. But the Red Devils stood tall one last time defensively, pushing Howard backwards to secure the turnover on downs with just under two minutes to go.

Owensboro proceeded to go into victory formation, running out the clock and closing the door on a 27-21 win to move on to the third round of the postseason. Head Coach Jay Fallin was pleased with his team’s efforts, knowing just how tough it is to beat a talented Gators team.

“We knew they were a really good team,” Fallin said. “I have a tremendous amount of respect for William Howard and his staff and the job that they do. They have a huge senior class just like us. They beat South Warren a couple weeks ago and they beat Logan County who is a really good team. They’ve got nine wins this season and that doesn’t happen by accident.”

Greenwood had scored over 28-plus in nine of its 11 games this season coming into play, as Howard and Long lead a strong athletic ground game offensively. Fallin was pleased with his team’s efforts to stifle them, holding the Gators two touchdowns on the night.

“They run a novel offense that involves a ton of misdirection,” Fallin said. “They have several good players and one elite player in No. 16 (Howard)… It’s a testament to how many postseason games our kids have been in, how bad they weren’t ready for this to be over, how much it meant to them and how much they wanted to keep the season going that they continued to make the plays they had to make.”

Fallin gave credit to their ability to stay strong defensively on multiple drives in the second half due to some halftime adjustments, thankful to have cameras and TV’s on the sideline in order to break down film shortly after it happens.

“They only scored 14 points because we gave them seven via turnover,” Fallin said. “For a team that’s been averaging 40 a game, 14 is [pretty solid]… It’s different than when I played when the coaches had to ask the players exactly what they were seeing out there. You can see it exactly and you can show it to the kids and that gives you a great opportunity to make adjustments at halftime.”

Upperclassmen making big plays also became a common theme throughout the night for Owensboro, as Goodwin and Rogers got big touchdowns on fourth down. Fallin was proud of them for thriving in the moment, noting that it’s plays like those that can keep their postseason run going.

“Late in the season in the playoffs your best players and your most dependable players have to be on the field,” Fallin said. “They’re going to make the plays. Jeremiah makes the huge play on the fake punt and then we give the ball to Khalil on the reverse to score. Your seniors have to step up and make plays in the postseason late and we did that tonight when we had to have it.”

The Red Devils now turn their attention to next week’s postseason matchup with Fairdale, as they will look to have a strong week of practice in order to grab another win and keep their postseason run alive.

“I told the guys, there’s eight teams left in 5A after tonight,” Fallin said. “We’re happy to be one of them and we want to do what it takes next week to make sure that we’re one of the four left Thanksgiving weekend.”