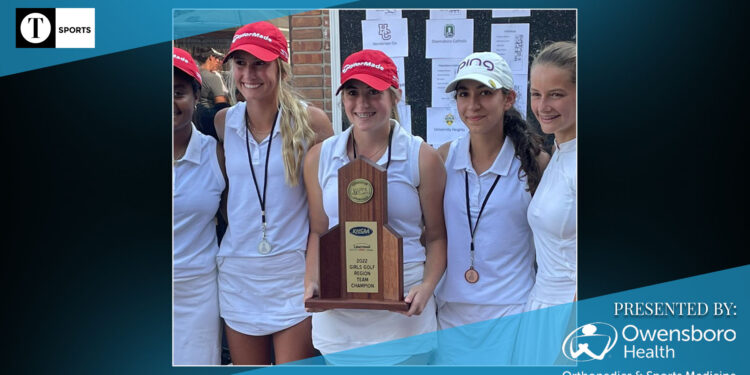 Reynolds led the way for the Lady Panthers all season long, shooting a 73 to place second individually at the 2nd Region Tournament. Her efforts helped them claim the regional title, as well as qualifying for state for the second straight season—having done so for Apollo as an eighth grader in 2021.

Reynolds low round on the season was a 68 and Co-Head Coach Jonas Billingsley said that her efforts outside of matches and tournaments is what has shaped her into the successful golfer she is so far in her young career.

“Claire’s dedication to golf and becoming one of the best around is not hard to see or believe,” Billinglsey said. “Look around any local golf course after school and you will see Claire and her dad out there working on a skill.”

Salamah also joined Reynolds as a new golfer for Daviess County, having competed for Owensboro a year ago. She proved to be a strong counterpart for Reynolds, performing well all season long.

Despite battling a number of injuries during the 2022 season, Billingsley said that Salamah never slipped on the course or in the classroom for an impressive year with the Lady Panthers. Her low round on the season was a 69.

“Alexa was so consistent all year,” Billingsley said. “She’s a great student athlete, she made coaching easy.  Her parents should be super proud of her on and off the field. I envy her short game. She might actually be a wizard with a wedge in her hand.”

Last but not least is Baylie Billingsley, who had a low round of 79 on the season en route to forming a dynamic trio on the links for Daviess County. Jonas said that the progress she made this year has been impressive, with her work ethic being the key to solid rounds week in and week out.

“Baylie made some major strides this year improving her overall game,” Billingsley said. “She loves golf and she will go practice on her own now without a nudge from mom and dad. She is strong and can hit the ball a country mile. As she continues to improve her length will make any golf course play short.”

The common theme with all three is the efforts that they are willing to put in each and every day, as Billingsley said that three being similar in talent makes them want to consistently compete and improve their game.

“These ladies made commitments to golf and becoming better way before the season started,” Billingsley said. All three were active in Winter, Spring and Summer golf contests, professional coaching, and lots of practice sessions on the range… Having someone there that can challenge each other for number 1,2,3, will help them focus and come ready to compete at their best.”

Billingsley is thrilled for the girls to be able to see the fruits of their labor, knowing just how special having three Lady Panthers on the 2nd Region First Team is.

“Having three freshman Lady Panther’s earn 1st team all-region awards is special,” Billingsley said. “It is a testament to the time these girls have invested into this game, the fruits of their labor.”

With such a young successful trio and plenty of talent to go around within the program, Billingsley feels that the Lady Panthers are going to be a very good team for several years going forward.

“This ABC trio, along with Annalee Yager (who also had a great year) gives us a superb foundation to build on,” Billingsley said. “We had several new girls come out this year. My goal is they continue to practice, get positive instruction, get stronger and come out next year ready to compete at a higher level.  There are a few younger lady Panthers that will be coming into the program over the next couple of years that will contribute as well.”