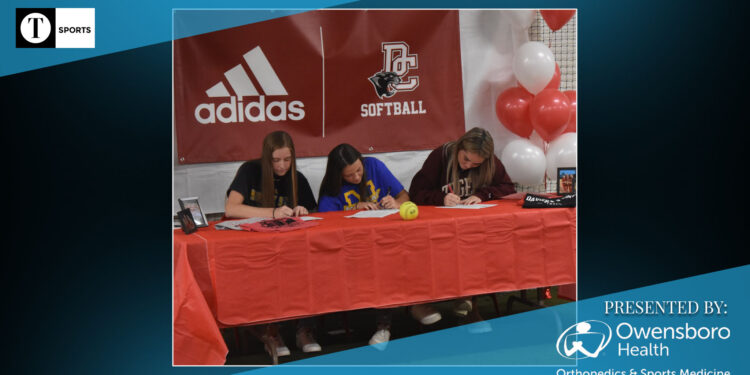 Some of Daviess County softball’s finest took the next step in their athletic careers on Monday night, as seniors Raylee Roby, Jessie Daniels and Kaydence Hamilton all committed to their respective universities.

Roby will be continuing her pitching days at Murray State University, while Daniels is headed to Campbellsville University and Hamilton will join Midway University. And while the three may not be going on to the same school, Hamilton said that they knew that they wanted to share this moment together.

“We’ve gotten really close throughout our softball career here at Daviess County,” Hamilton said. “So it really just spoke out to us to do it together since we’ve all been friends for awhile.”

Daviess County Head Coach John Biggs said that he thought that them choosing to do this all together was something special and is proud of the example it sets for the program and its future.

“They came to me and said they really wanna do this and keep it within our softball family and the people that have really been important to us,” Biggs said. “It’s big for our younger kids and for them to include them and want them to see this to let those kids know they have those opportunities.”

Things like this have shown that Hamilton has been a leader for the Lady Panthers, even if she might not have had much playing time during her first three years. Playing behind now Auburn Tiger Millie Roberts, Hamilton continued to improve on her game and that’s something Biggs is very proud of.

He went on to say that the plan is to give her plenty of varsity action this season, as he is looking forward to seeing her hard work pay off.

“She stayed the course,” Biggs said. “She understood what was ahead of her and she continued to work hard. She was just there for the younger kids. She showed good leadership even though she wasn’t in the starting lineup and I think what she’s done the last couple of years is try to diversify herself a little bit… We hope that she’ll do a good job behind the plate for us. She’s really improved her bat… She’s made really good contact in the fall and hopefully she can continue that.”

Hamilton is excited to finally sign with Midway, thrilled to know that the recruiting process is behind her and that she knows this is the best place for her to continue her athletic career.

“I was really stressed out and didn’t know if it was the right choice,” Hamilton said. “I had other choices and options. I finally sat down and talked to the coach and I loved everything about the school.”

Before moving on to the collegiate level, Hamilton is excited for senior season and ready to get back on the field with her fellow Lady Panthers.

“I’m honestly looking forward to getting back on the field with Raylee and Jessie,” Hamilton said. “I’ve always been close with them and I’m just really excited to have my senior season with them.”

Hamilton’s counterpart in Roby will make her way to join the Racers following her senior season, a team that won its first OVC Championship in 2022. Raylee’s resume fits the recent success in the circle that Murray State has had, as she posted a 21-5 record across 163.2 innings in 26 games in the circle during her junior year, while toting a 1.58 ERA and a whopping 245 strikeouts.

She said that when she visited Murray State’s campus it felt like home and that the team’s players and coaches made it feel like it was a family-like environment, ultimately selling her on her commitment.

“I went to a camp and just all the players there were very nice,” Roby said. “I went on a visit the next week and it just felt like home. I like the coaches and they felt like family and I knew that I would really like it there.”

Roby is thrilled to have the recruiting process behind her now, saying that it’s a weight off of her shoulders and now she can focus on the upcoming season and help them have another long postseason run. Biggs expects big things from her out of the circle during her senior year, as he knows that she is a warrior that thrives in big moments.

“The things that she’s been able to accomplish in such a short span is really amazing,” Biggs said. “Probably one of the hardest workers we have. She’s out here on a daily basis trying to fine tune her game and always trying to do some different things and trying to increase her pitch repertoire.”

Daniels has also become a key factor in Daviess County’s recent success, being a self-proclaimed late bloomer that has electrified their lineup while also switching from middle infield to first base.

“Her sophomore year, the way she kind of came on to and with her power and being able to protect some of our other hitters, it was just amazing how she improved and made that big jump,” Biggs said. “She doesn’t really get a lot of credit for her defensive skills. She’s worked extremely hard there at first base.”

Biggs said that they always knew Jessie would physically and athletically be capable of contributing, but it was her work ethic and leadership that has helped shape as the player she is today.

“Even being a non-senior that sophomore year and even continuing last year in her junior year, she became a vocal leader for us,” Biggs said. “That’s important and we’ve talked about how leadership doesn’t have to be from seniors. It can be from anyone.”

Daniels is excited to have the stress of the recruiting process behind her, as they

“I think it was like the summer before my sophomore year was when Campbellsville started to recruit me and I think I kind of knew from the beginning that I was like ‘I like these people’…” Daniels said. “I loved the campus, I loved the people,” Daniels said. “I’ve been to camps and I’ve talked to players and I’ve never heard anything bad. Then the day that it happened I was like, this is what I want. I’m ready to make the decision now. It just felt right. Everything felt so homey when I was there.”

Daniels also had her future Campbellsville Head Coach Shannon Wathen and future teammates and former Owensboro Catholic standout Camille Conkright in attendance for the signing, only proving to her even more than she’s made the right call on her future collegiately.

“It’s just reinforcing my decision,” Daniels said. “I’m positive I made the right decision now. And Camille and I have played together since we were little, but it’s nice knowing that she’s here and they’re already supportive.”

But before she makes her way to join Campbellsville, Daniels will look to pick up where she left off in 2021—where she posted a team-leading .467 batting average, while mashing 15 home runs and tallying 39 RBIs en route to winning 3rd Region Player of the Year. She hopes to continue to improve at the plate and help go on a long postseason run once again, excited for her senior season with the Lady Panthers.