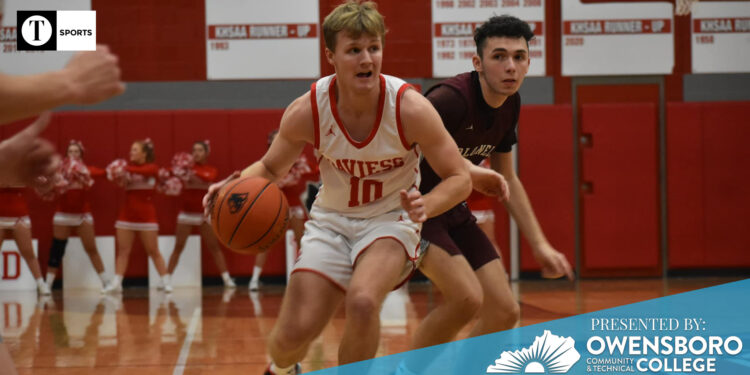 The Panthers struggled to handle Henderson County’s fullcourt press and zone early, as a plethora of first-half turnovers and losing the battle on the glass led to a 74-43 loss at home.

Daviess County got off to a rocky start, with the Colonels press causing havoc and leading to an 8-0 run for the first three minutes of play. Sophomore Gage Phelps was able to stop the run at 8-0 with a pull-up mid-range jumper, but the fullcourt pressure continued to stifle the Panthers, leading to a 19-8 deficit to end the first quarter.

The Colonels bounced right back led by an impressive 14-point first half from senior Gerard Thomas, sparking the offense to go with a pair of shots that he pinned off the backboard. Sophomore Jaxon Brown was able to get five straight points to end the half, but the Panthers still found themselves down 41-24 at halftime.

Daviess County continued fighting to cut it to 46-33 halfway through the third, but sophomore Cooper Davenport’s fifth three of the night halted all momentum. Henderson County continued to dictate the pace of play as a result, closing the third holding a 61-36 lead.

Along with the early turnovers the Panthers struggled on the glass, getting outrebounded 33-19. This played a big factor throughout as well as in the fourth, helping the Colonels close the door on a 74-43 loss for Daviess County.

Going with his two blocked shots and barrage of steals on the night, Thomas finished the game with 16 points while Davenport’s five threes led him to a game-leading 17 points for Henderson County. Phelps was the only player to finish in double figures for the Panthers with 15 points and five rebounds, while sophomores Ayden Ayer and Jaxon Brown had nine points each.

Daviess County falls to 7-10 on the night as their three-game winning streak is snapped, as they will now look to bounce back on the road Saturday against Warren East at 3:30 p.m.