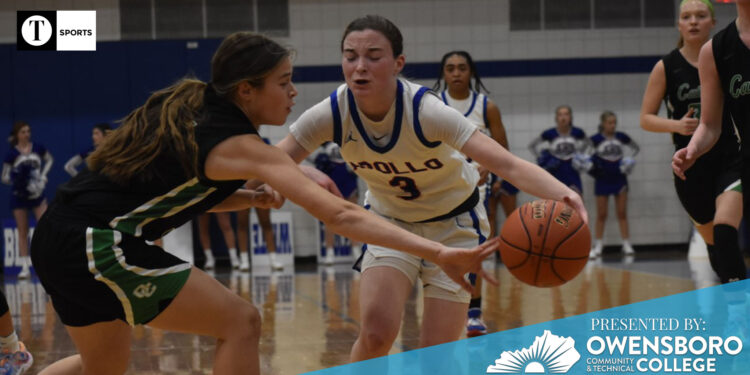 Owensboro Catholic caught fire on both ends of the floor in the second quarter, leading to three straight quarters of single-digit scoring for Apollo in a 72-31 district loss at home.

The Lady Aces got off to a rough start, turning the ball over and not connecting on some of their early looks to trail 10-6. But Owensboro Catholic eventually figured out the E-gals defense, closing the first quarter on a 9-0 run to take a 15-10 lead into the second.

After a wide-open three by freshman Kennedy Lane cut Apollo’s deficit to 15-13, Lady Aces Head Coach Michael Robertson wanted a timeout. His message clicked with his team, as they proceeded to go on a 13-0 run to take a 28-13 lead with 2:25 seconds to go in the first half.

Junior Taraya Thompson was able to sink a layup right off the bench to halt the E-gals run, but Owensboro Catholic kept pushing the pace and got a floater from junior Hailee Johnson at the buzzer to make it a 36-18 game at halftime.

Apollo’s luck didn’t have much coming out of the locker room, as they were held scoreless for the first five and a half minutes of the third. Sophomore Gizelle Whitlock was able to knock down a pull-up three from the top of the key to end the Lady Aces’ run at 13-0, but Owensboro Catholic wasn’t done yet.

They continued to find open looks, with Riley knocking down three of her five threes in the quarter—one being a deep fall-away jumper at the buzzer—to help give the Lady Aces a 59-26 lead over the E-gals heading into the fourth.

This was more than enough momentum for Owensboro Catholic to seal the deal in the fourth, holding Apollo to single digits for the third consecutive quarter to wrap up the 71-34 district win and move to 15-4 and 4-0 in district play. Head Coach Michael Robertson wasn’t happy with the Aces willingness to fire away from deep in the first quarter, but was glad to see them focus on the little details offensively to turn things around during the ensuing quarter.

“I thought at the beginning of the game we took way too many threes,” Robertson said. “We were forcing things trying to shoot outside, because that’s what they were giving us instead of attacking. I thought in the second quarter we did a lot better job of getting to the basket and making shots.”

Drilling five of the team’s nine threes, Riley led the way with 21 points while Johnson followed with 16 points, senior Lexie Keelin hit three from deep for 12 points and sophomore Aubrey Randolph added 10.  Robertson was complimentary of his team’s effort as a whole, with a number of players continuing to get involved offensively as of late.

“Aubrey’s been doing really well, Karmin hit some nice shots and Hailee did a good job again of getting to the rack,” Robertson said. “I was happy with that. Maddie did a good job today, as he was able to alleviate some pressure by attacking the basketball as well.”

The E-gals had Lane as the only player in double figures with 16, while Whitlock had eight and senior Jennifer Lee had three points and 10 rebounds. Robertson and company’s goal throughout the season has been to limit teams to 40 points or below and he felt like they did a good job of that.

The Aces skipper went on to say that as long as they continue to build on what they did offensively against the E-gals as well, that they’ll continue to improve their shot-making.

“This whole week we’ve been working on our offense,” Robertson said. “I thought it looked a little bit better out there. We were actually able to execute our plays. They didn’t always go in, but we were running the plays and getting the looks that we want.”

Owensboro Catholic will get its first shot to do that again on Saturday, as they have a quick turnaround with a road matchup against Southwestern at 12:15 p.m. Apollo on the other hand falls to 6-14 and 0-4 in district play, as they’ll play their second straight home game on Saturday against Graves County at 4:30 p.m.