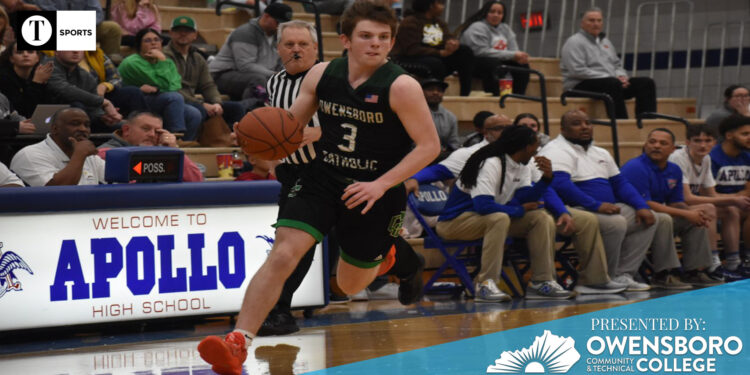 After an abysmal first half from the Aces, Head Coach Tim Riley asked for more effort out of his team. He got it in the second half, as Owensboro Catholic’s intensity on both ends led to a dominant 72-31 road win over the Eagles.

A left-handed reverse layup from junior Deuce Sims and a three from senior Brian Griffith got the Aces started on a 5-0 run, as  Apollo went scoreless for nearly the first three minutes of the night. But neither team was able to pick up steam, with Owensboro Catholic taking a 13-5 lead at the end of the first.

The Eagles were able to close the gap to start the second, going on a 7-0 run of their own capped off by a three from freshman Kobe Kelly to make it 13-12 Aces with 5:55 left in the first half. And while sloppy play from both sides followed for the remainder of the quarter, Owensboro Catholic still led after a tough layup from senior Zjhan Tutt made it 22-18 heading into the locker room.

Aces Head Coach Tim Riley was not happy with the way his team played in the first half and made sure to let them know at halftime. The message was heard loud and clear, as Owensboro Catholic came out of halftime looking like a completely different team.

“We didn’t play with an edge in the first half,” Riley said. “We didn’t play excited like it was going to be easy. They’re trying too. We blistered them at halftime and they played a lot harder. We moved the ball, attacked the rim and ran the floor hard.”

The Aces fullcourt pressure bamboozled the Eagles in the second half, leading to a dominant 28-9 third and a 50-27 lead as the quarter came to a close.

Apollo didn’t have any better luck in the fourth, as they were held to four points while Owensboro Catholic drilled four threes to help them close the door on a 72-31 win that moves them to 4-0 in district play.

The Aces hit 12 threes on the night, with eight of them coming in the second half as a result of the raised intensity defensively. Riley said that when they play that hard on both ends of the floor, they can really space things out with their shooting.

“We turned them over and then we started getting some open threes and we’ve got a bunch of guys that can make threes,” Riley said. “As a team right now going into tonight we are shooting 36% from three. That’s pretty good for a high school team.”

Senior Parker Gray played a big part in that with three from deep to lead all scorers with 15 points, while senior Brian Griffith and sophomore Luke Beickman both finished with a pair of threes and 10 points each.

With two district games left on the schedule this was a big district win for the Aces, as they sit at 17-2 and will look to carry their second-half effort into a home game against Grayson County 7 p.m. on Monday.

“I just told them I don’t like having to come in and scream at the walls to get them to go,” Riley said. “I think special teams and special players play with an edge. We didn’t have an edge in the first half, but we had an edge in the second half.”

Apollo on the other hand had Tutt as the only player in double figures with 12 points on the night, falling to 3-15 and 0-4 in district play with its fourth straight loss. The Eagles will look to bounce back against Grayson County on Tuesday, hosting them at 7:30 p.m.