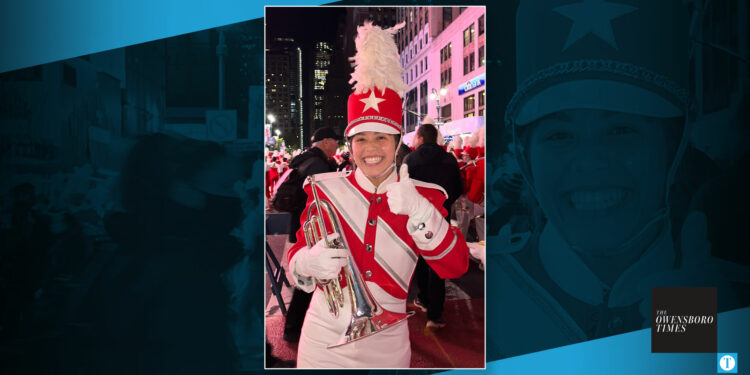 The two bands are honor bands, meaning they are not affiliated with any high school or college. High school students from around the country audition for the band then come together to be fitted for uniforms and some with instruments, to practice and then perform together.

Smith, who is a 2020 Daviess County High School graduate, will join 319 other members of the band as they get ready for the parade in Pasadena, California. The 320 members of the 2022 Honor Band represent 213 schools from 39 states. They gathered for the first time on Monday for rehearsals. They performed at the Tournament of Roses “Bandfest” and will have a featured appearance in the Rose Parade on New Year’s Day.

“The Tournament of Roses parade is much longer than the Macy’s Thanksgiving Day Parade so I would have to say that I am most looking forward to sharing the adrenaline rush and true joy of completing the route with all of the new friends I have made,” Smith said prior to the performance.

Smith said she never thought in her wildest dreams she would be able to say she marched in either of these parades, let alone both in the span of two months.

The Macy’s Great American Marching Band that Smith performed with in November was made up of 224 members. Performers had to submit audition tapes prior to the parade and were individually selected by members of Macy’s Branded Entertainment.

“It was one of the best experiences of my entire life,” Smith said about the Macy’s parade. “There is something about performing for hundreds of thousands of people live, with everyone screaming and clapping for you. I was able to meet so many new people and create great friendships and memories that I will cherish for a lifetime. I am so thankful to my past band directors and friends and family that believed in me and my abilities to reach this point. “

Smith’s primary instrument is the French Horn, but she marches with the Mellophone. She has been playing since 7th grade.

“I am just so grateful to both of these organizations for giving my class the opportunity to perform even though this is meant for high school students,” Smith said.