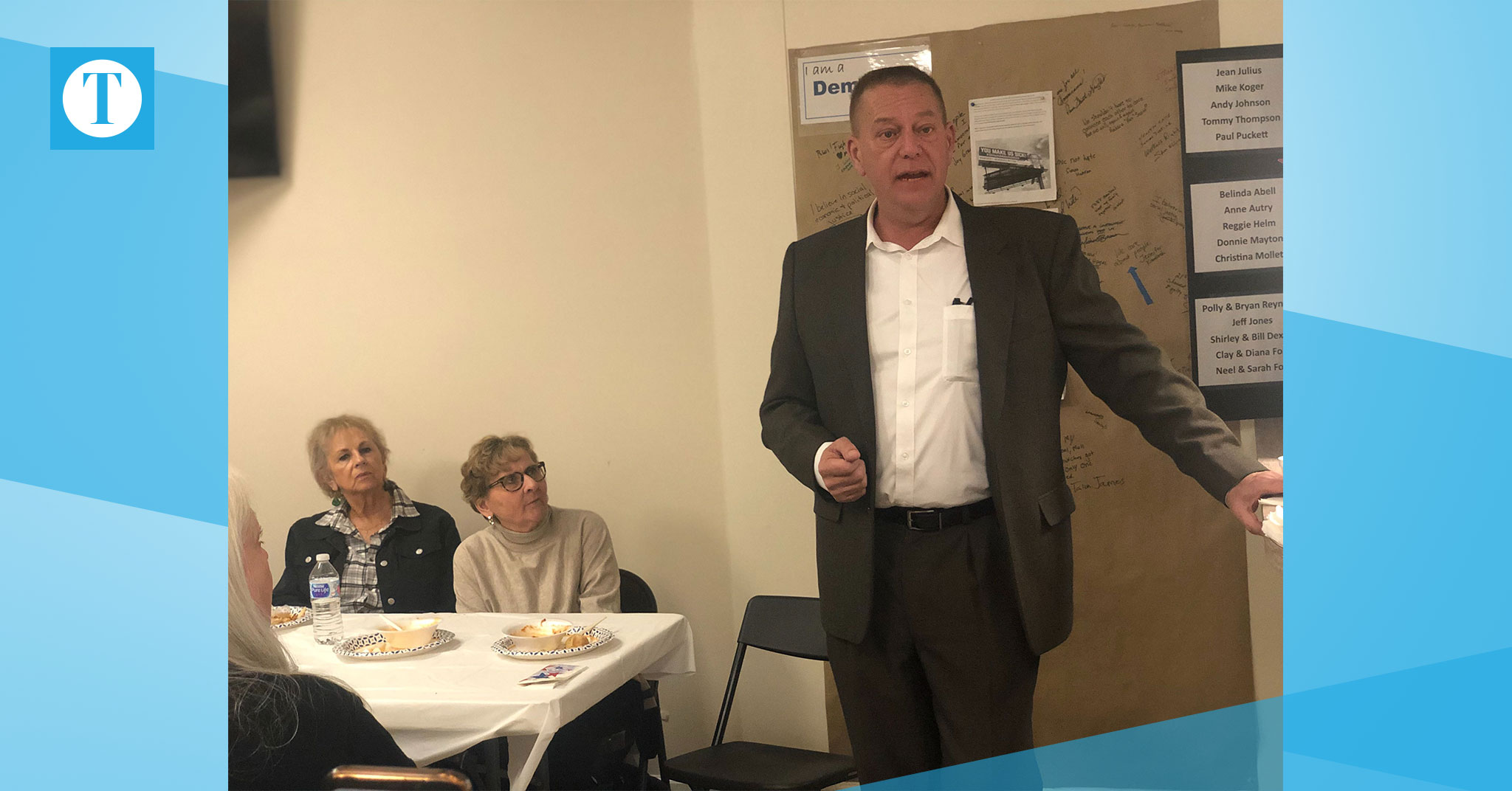 Democratic U.S. Senate Candidate Mike Broihier walked into Tuesday’s meet-and-greet at the Daviess County Democratic Headquarters relatively unknown to many but left the crowded event having piqued the interest of those in attendance.

“Every election, he just whips his opponent,” Broihier said. “He’s not run against an educator, a veteran, a journalist and a farmer before. I can beat him — I can whip him.”

Broihier’s career highlights include decades of military experience — as an officer and Colonel with the United States Marines — with overseas deployments to Japan, South Korea, the Mediterranean and Somalia. Broihier said Tuesday that his years of international military experience taught him the ins and outs of world commerce.

“It really grew my understanding of how things work at an operational level,” he said.

Broihier also has journalism experience, as he was employed for five years as a reporter and editor at The Interior Journal in his hometown of Lincoln County, Ky.

“You really, really learn what’s important to communities, what makes them tick, and what they need as a reporter,” he said.

Even more, Broihier taught at the University of California, Berkeley for years, and has been a successful asparagus farmer for the last decade, he said. All of these experiences prepared him for the political issues facing both Kentucky and the United States today, he added.

Broihier faces a tough primary election in May. As one of 10 Democrats running, and with Amy McGrath having “vacuumed up” most of the campaign funding early on, Broihier says he has to work extra hard to get his name out there and advertise his platform across the state.

“I’m hitting the small counties, I’m going everywhere,” he said, adding that his advertising budget can’t afford TV time, but that bumper stickers and a strong social media presence and face-to-face campaign ventures have garnered many supporters across the state.

As for his politics, Broihier considers himself a progressive Democrat, telling the crowd Tuesday that “running up the middle against McConnell” is, what he believes, a sure-fire way to lose the November election.

Questions about his stance on gun control were brought up, to which Broihier said he believed past legislation — such as the assault weapons ban — were executed poorly and needed revisement.

“[Other veterans and Republicans] thought my wife and I were traitors because we don’t think that a crazy person or a felon should have a gun,” he said. “But the assault weapons ban got hung up cosmetics and certain types of weapons, literally, by name. If we’re going to do this right, it should be focused, not on cosmetics, but function.”

For example, he said, a magazine extending beyond the handle of a pistol is “dumb,” though he joked that “some people apparently like that.”

An advocate for a better economy and social justice in Kentucky, Broihier said he’s tired of seeing Kentucky struggle to bring in big businesses and keep them here. While cities like Louisville and Lexington are sometimes able to secure large means of commerce, those in eastern Kentucky — Appalachia, as he referred to it — have spent decades without the infrastructure needed to boost their economy.

“I’m thinking big picture — I’m talking real jobs, real work,” he said. “We need a federal-level plan to rebuild Appalachia and put the people to work. We’re at the bottom of every list you don’t want to be at the bottom of. We’ve got problems, and one thing Mitch McConnell is good at is splitting us up. A year ago, when I decided to run, I said, ‘This feels like too much of a fight to walk away from.’”