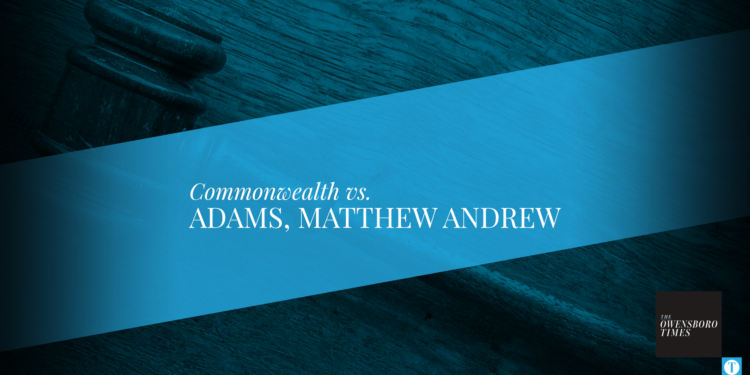 Matthew A. Adams pleaded guilty Tuesday to the 2018 murder of Erica Owen. Adams avoided a trial and the possibility of the death penalty by accepting a plea agreement that includes a sentence of life in prison without parole.

Adams, now 29, killed 25-year-old Erica Owen in her home on July 3, 2018. In addition to murder, Adams also pleaded guilty to first-degree burglary, theft over $10,000, tampering with physical evidence, and violation of an emergency protective order.

Terms of the plea agreement include Adams serving life without parole for murder, 20 years for burglary, 10 years for theft, 5 years each for two tampering charges, and 12 months for violating the EPO. The charges will run concurrently.

Commonwealth’s Attorney Bruce Kuegel, prosecution on the case, said Wednesday morning that the other charges are what elevated the murder charge to make the death penalty an option.

“This is the maximum plea short of the death penalty,” Kuegel said of the agreement. “The matter was discussed with the Owen family, and their input was part of this agreement.”

Daviess Circuit Judge Jay Wethington accepted the plea agreement Tuesday afternoon following a day of mediation that was overseen by retired Judge Phillip Patton. The defense team for Adams filed a motion for mediation with Wethington in August.

“We’re happy that nobody had to go through a trial,” Michael Bufkin, one of Adams’ attorneys, said Wednesday morning. “It was a tough day (of mediation).”

A final hearing has tentatively been scheduled for Dec. 13, during which members of the Owen family will be allowed to give victim impact statements. Kuegel said that date could move up if the pre-sentence investigation is completed sooner.

The case was originally expected to go to trial in October 2020, but the trial was cancelled at the time due to the pandemic. A new trial date was never set. Adams faced other criminal mischief charges due to the damage he’d inflicted on Owen’s property but that case was dismissed.

Adams will be held at the Daviess County Detention Center until final sentencing. Bufkin said the defense team will request transport to the Department of Corrections as soon as possible.