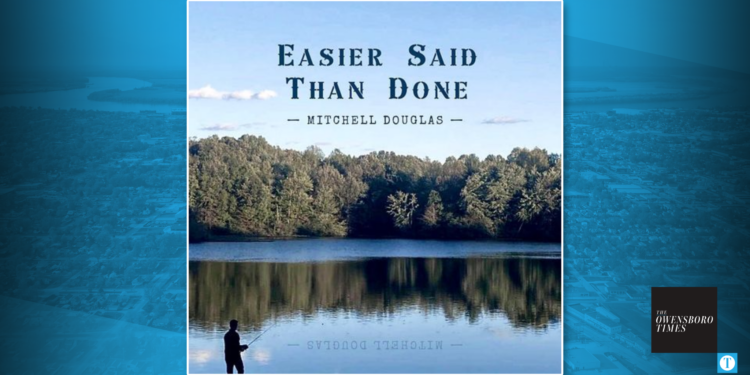 Owensboro native Mitchell Douglas is set to release his first album Easier Said Than Done on Christmas Eve, and he said the inspiration from his hometown is all over the project.

The writing of the album came naturally to Douglas while he was docked in town during the pandemic.

“I get so much inspiration from Owensboro. I wrote every single song on this album in Owensboro,” Douglas said. “It puts me in a state of mind that I can’t explain. It’s just the lyrics come easy in my head so I really want the city to hear it.”

Getting to the place to make music has been a dream since Douglas was younger as a singer in the choir. During the pandemic, he started to realize he wanted music back in his life.

He started a mission to make more music, and as his album is titled, he found it was easier said than done to get the album accomplished.

It wasn’t until he wanted to go into the production of the album in the summer that he started to see his dream start to materialize.

With the help locally of Matt Gray at Gray Sky Music Studio, he was able to record and write all the music over the summer.

“It was no more just saying it and really just getting the work together, writing the songs, making the contacts to get it done. So the name fits pretty well,” Douglas said.

Once he committed to making the album fully, Douglas said it was everything he had dreamed of and more. He said there were many days where fingers hurt from the guitar and his throat hurt from the singing, but the thought of knowing it was a dream coming true was worth it all.

The 10-track album features a few songs that he said he put some of his best work into, including The Girl I Knew Before. The track focuses on a long-distance relationship and the feeling of disconnect he felt with the relationship.

He promises a bit of variety among the album as The Girl I Knew Before is a classic-sounding country song, but there are bits of rock, ballad and some new-age sounds as well.

Another song he is excited to release is the upbeat track titled Good Girl — one of Douglas’ favorite songs to perform live as he said the crowd tends to enjoy it.

“It’s just about a girl that’s kind of a Southern Belle during the daytime, but at night she gets a little wild and she can mess with your head,” Douglas said.

Douglas is excited to see how the City of Owensboro enjoys the project.

“I really want to start [with] Owensboro because it’s the Bluegrass Capital of the World, it just has so many country and bluegrass roots and has always inspired me to do what I’m doing now,” Douglas said. “So without my hometown, I wouldn’t be doing this.”

The album will be available on all streaming platforms on Dec. 24.