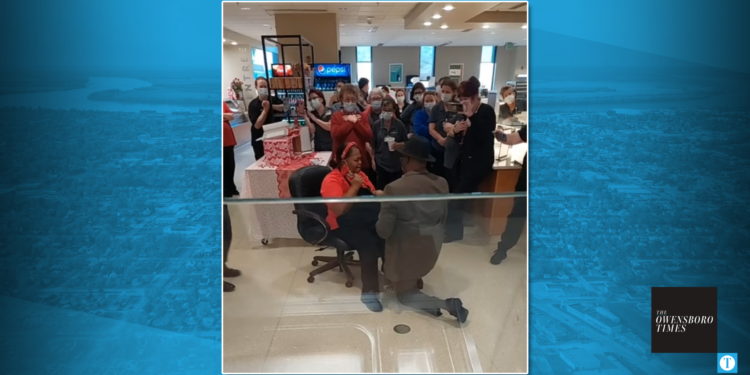 Brien Mathews and Belinda McManis met when they were in culinary school 11 years ago, and the couple works together at the Owensboro Health Regional Hospital in the cafeteria. So, it only made sense for that to be the place Mathews dropped to one knee on Monday to ask McManis to be his forever Valentine.

Mathews is the Executive Chef at OH and handles all things behind the doors, while McManis is a retail worker handling things on the floor.

As seen in a Facebook Live video recorded by Ray McHenry, Mathews serenades McManis by singing This is My Promise by The Temptations before he pops the question.

“I thought I was going to fall out,” McManis said. “It was a real big surprise.”

The two had been engaged for the past year when Mathews proposed with his grandmother’s ring; however, he wanted to ensure that she had a ring that represents more than that.

“I wanted something that represents the love that I have as she’s waited on me to actually do this,” Mathews said. “I really wanted her to know how much I cared about her and the year she’s spent with me.”

And for both of them to celebrate their love in a place they love, surrounded by coworkers they love all while doing the career that brought them together, McManis said she is extremely grateful for it all.

“I wouldn’t trade it or do it over again for anything,” McManis said. “I feel like I’m truly blessed and I’m grateful.”