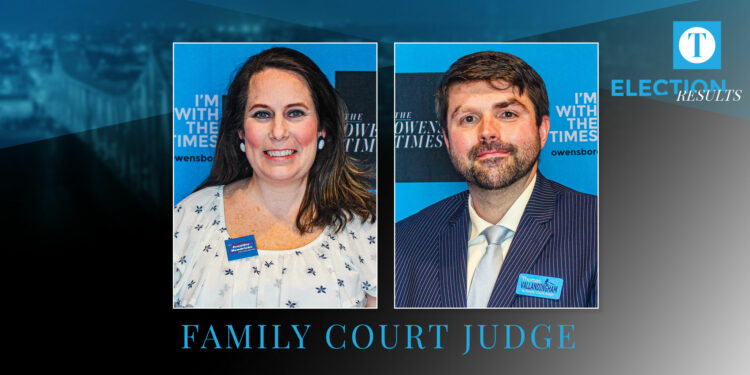 Jennifer Hendricks and Thomas Vallandingham are set to square off for Daviess County’s current Family Court judgeship in the General Election this fall. The two beat out Julie Gordon — who was recently removed from the position by the Judicial Conduct Commission but was still able to run for the seat — in Tuesday’s Primary Election.

In part due to the seat being nonpartisan, there were more votes cast for Family Court Judge than any other local office on the ballot. There were 14,900 votes cast, and Hendricks claimed 7,270 (49%). Vallandingham drew 4,393 votes, while Gordon finished with 3,237.

Hendricks has built her own practice from the ground up for the last decade, primarily focusing on family law. Hendricks previously said the Family Court position is vitally important and can’t be taken lightly.

Hendricks is originally from Muhlenberg County. She eventually settled in Owensboro and has been here since around 2010, and is now raising a family here. Hendricks said she is highly involved with the community and always has been. Last year, she was the Daviess County Bar Association President.

“I want to thank the community of Daviess County whether you prayed, put up a sign, or told your family and friends about my knowledge, experience and work ethic and how I was best suited to be the next Family Court Judge,” she said. “I ask for that same support in November.”

Vallandingham has similarly been in private practice for several years locally, largely focusing on family matters.

“I’m thrilled to advance,” he said. I’m exceptionally proud of the work my wife and I put into this Primary Election. Without her love and support this would not have been possible. We have worked hard to do the right things, the right way, for the right reasons and I think that message resonates with people. I’m eternally grateful for all the support my friends, family, colleagues, and community at large has shown me.”

Vallandingham was born in Owensboro and has lived in Daviess County his whole life except during college. He previously said he hopes to restore some confidence in the Family Court Judge position if elected.

Vallandingham was a staff attorney for a Family Court Judge for three years in the 38th Judicial Circuit. Since 2015 he’s been in private practice in Daviess County.

“I was born and raised here, I’ve spent my life in service to this community and I will continue to serve this community,” he said. “We are excited to continue to share with Daviess Countians my vision for the Daviess Family Court. I believe the judgeship can be, and should be, a beacon of trust and hope in this community, and Lord willing, I will be able to restore that to the bench.”