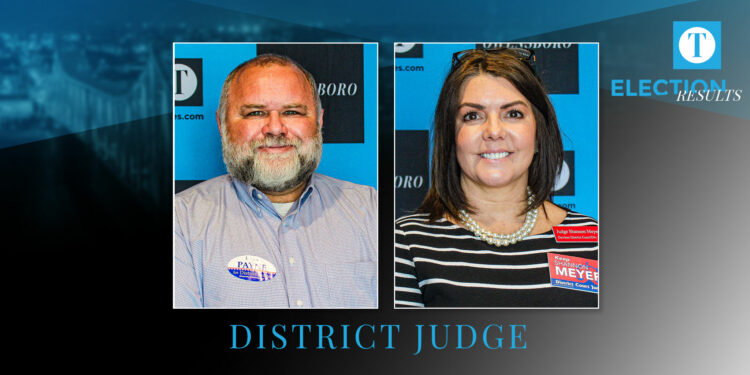 J. Nick Payne and Shannon Meyer advanced out of the primary and will battle in the General Election for the seat of Daviess District Court Judge, Division 3. Meyer was appointed to the seat in January after it was left vacant due to a retirement, but Payne drew the most votes in Tuesday’s primary.

In part due to the seat being nonpartisan, this seat drew the second-most votes of any local race on the ballot. Payne received 6,079 votes and Meyers claimed 4,831. Also on the ballot were Heather Blackburn (2,538 votes) and Phillip Page (1,360).

Payne is currently a prosecutor with the Daviess County Commonwealth’s Attorney Office He was pleased to finish first in the voting.

“I am very happy with the election results,” he said. “The hard work that my supporters and myself put into this election is evident in the results. I hope to build on the momentum of the primary win into the General Election in November. I think Daviess County voters sent a strong message of support for me and my campaign with over 6,000 votes in a four-candidate primary.”

Payne said it was especially meaningful to get such support when the other candidates were also worthy contenders.

“I know that there were two other strong candidates who will not be advancing and I hope that the experience I bring to the race will resonate with their supporters as they determine who to vote for in November,” he said. “I will continue to run a clean campaign based on my merits and experience in this community and prove myself worthy of the public’s trust to be their Elected District Court Judge.”

Though Meyer currently holds the seat, this is the first time she’s actually running for election. The position was left vacant in December 2021 by retired Judge Daniel M. Burlew II.

“As a first-time candidate, it’s been exciting to campaign and highly gratifying that so many voters have shown their faith and trust in me as their District Court Judge,” Meyer said.

Meyer was previously a prosecutor with the Daviess County Attorney’s Office, a role she said gave her invaluable experience for the judgeship. Meyer hopes that her experience the last few months as judge will be evident to the community so that she may continue her work.

“I’m looking forward to getting some rest and then hitting the campaign trail for the fall. I’ve learned a lot as a candidate and as District Court Judge,” she said. “I learned that I’m good at being a judge, I want to continue serving Daviess County and I plan to work hard to earn everyone’s vote this fall.”