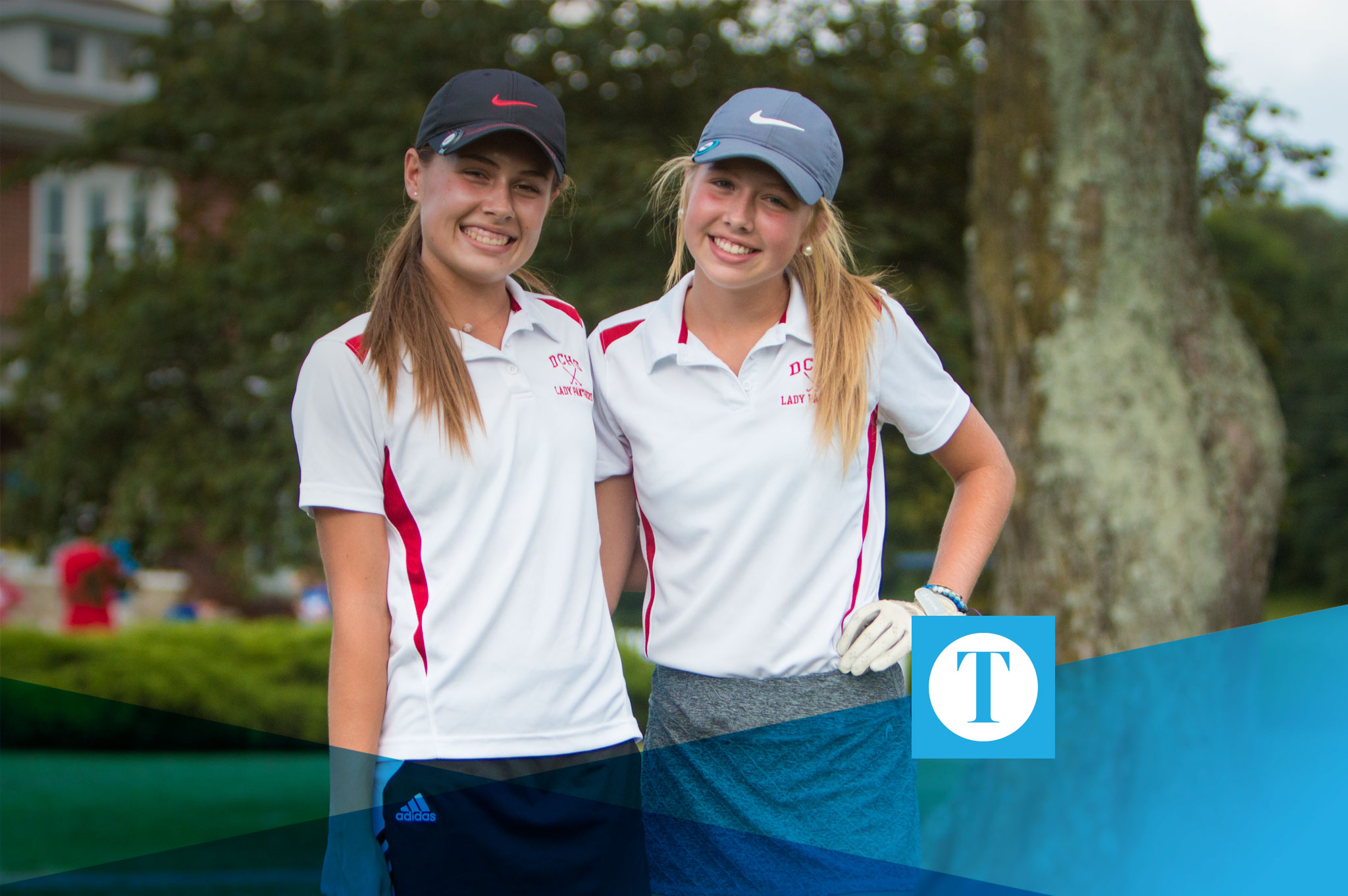 Grace (left) and Addy Heady have been competing together for years as sisters. Their time on the course together is nearing an end. | Photo by Ryan Richardson

The Heady sisters have come a long way from going to the golf course for a fun day of hitting balls with Papaw.

It was almost by luck that Grace and Addy even picked up the sport, as their grandfather Richard didn’t give golf a chance until after he retired. His brother convinced him to tag along one day, and the journey really began before the sisters were even born.

“I told my brother I’d go one time, and that’s all it took,” Richard said. “I’ve been playing ever since. Once the girls came along, they thought they wanted to play some, too.”

It started innocently enough, as it was a chance for some quality family time. Their dad, Todd, didn’t really play, so no one had expectations of the hobby developing into something more. Grace, now a senior, began competing in tournaments first, but Addy, a freshman, wasn’t far behind.

“It was just for fun,” Addy said. “I just wanted to be good enough that I could go play with my Papaw, but I fell in love with it and it took off.”

The sisters started developing their skills in the First Tee program, and soon began competing in the Go Series. Now, outside of representing the Daviess County high school team, they’re participating in national tournaments for the Hurricane Junior Golf Tour and the American Junior Golf Association.

There’s always sisterly competition, but each always wants the other to succeed. Grace said playing together outside of school is something unique that not many golfers can experience.

“We get to travel and play on different collegiate courses as sisters,” she said. “It’s like a mini golf vacation, so that’s enjoyable.”

Grace and Addy are still riding on the high of helping the Lady Panthers win the city-county golf championship — where Grace finished as medalist after a one-hole playoff — but they have to temper any remaining emotions as they compete in the regional tournament today.

Though her high school career is nearing its end, Grace isn’t anywhere close to calling it quits. She’s hoping to go on to play collegiately, but for now she’s still looking forward to her time left as a Lady Panther.

“Right now I’m just enjoying the rest of the season,” she said. “I’ll continue until it’s too cold to play, then I’ll start back up February or March.”

It will be a new experience for the sisters once Grace moves on, as they’ll lose out on that extra bond few other golfers have on the course.

“She always understands what’s going on,” Addy said. “She’s always there for me.”

Todd said he’s had his share of uncomfortable car rides home when only one daughter or the other has a good day, but echoed Addy, saying the sisters always have each other to lean on.

“Because it’s kind of individualized out there, they’ve felt what it’s like to have bad days,” Todd said. “It’s all on you. You can’t hide it. They root for their sister because they know what it feels like. They’re competitive, but they always want their sister to do well.”

As Grace moves on to whatever future endeavor eventually comes her way, the sisters will have to cope with the experience of truly being on the course alone.

“It will be an adjustment for me if I do go play collegiately,” Grace said. “I’ll be own my own. It will be a big adjustment period getting used to everything, but it will be exciting at the same time.”

Since Addy has three years left, she can count on her current fellow teammates to develop even stronger relationships, but she’ll also have a new learning curve.

“The biggest thing is I’m going to have to adjust to is Grace leaving for college,” Addy said. “I’ve never played on my own before. That’s going to be different. I’m not going to have somebody there all the time.”

Wherever their careers take them, though, they’ll not give up finding time for Papaw and the rest of the family. Luckily for Richard, there’s no age limit on golf.

“It’s something you can get a lot of enjoyment from and play until you’re old,” he said. “It’s a thing where the family can get together and play, and that’s special.”

Todd said he thinks that mindset carried over to his daughters, and it’s why they decided to focus their efforts on golf.

“That’s what enticed them a little bit,” he said. “With most sports, it’s over when you’re done with high school. With this, they knew they could keep doing it for a long time. You get a taste of a team and as an individual.”

Todd said he’s glad Grace and Addy have the chance to play without the normal pressure.

“For them, to go play with Papaw is so relaxing because they play so much competitive golf,” Todd said. “With him, they don’t have to worry about the score. They just hang out and hit some balls.”

That’s just how Richard likes it, and it’s just as well, because he can’t really compete with his granddaughters anyway.

“I can’t beat them,” he said with a smile. “They can outdrive me, and they get a big kick out of it. But it’s fun. That’s the kind of golf I play. I don’t play serious golf. I play to have fun.”