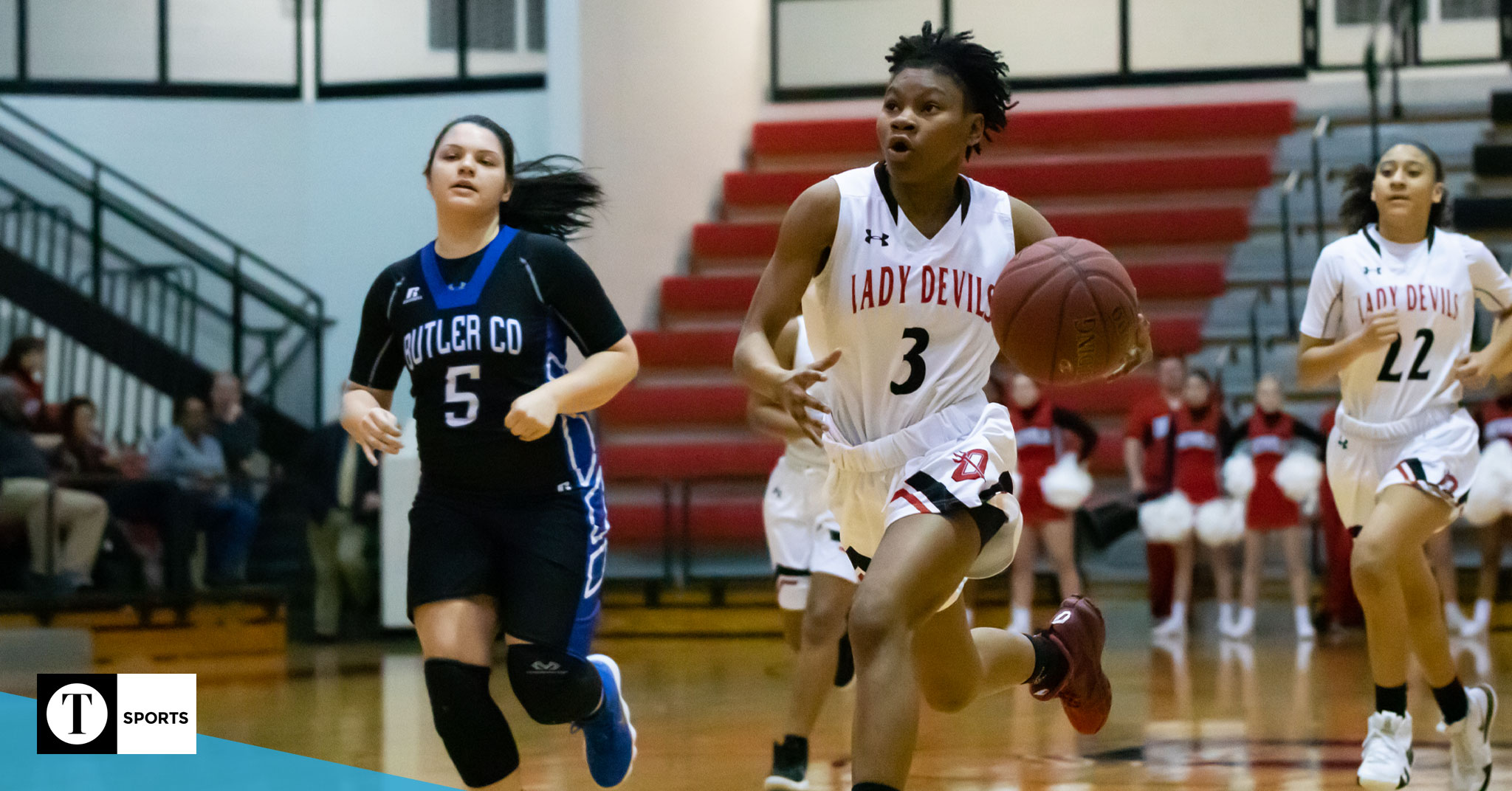 LeMiya Greer drives to the lane in Owensboro's win over Butler County. | Photo by Marc Ray

GIRLS
Apollo 54, Madisonville-North Hopkins 41
Amber Dunn and Zoe Floyd each posted double-doubles for the E-Gals (17-11) in a road win over the Lady Maroons (20-7), who had won seven games in a row.

Dunn scored 14 points and added 13 rebounds, while Floyd posted 12 points and 11 boards. Addison Carter hit five 3-pointers to finish with 15 points, and she had 8 rebounds.

Floyd scored 6 points in the opening quarter to help Apollo take an 18-12 lead. After a low-scoring second frame by both teams, the E-Gals led 27- 18.

Even scoring from a handful of E-Gals allowed them to keep their distance through the third period, and they only allowed two baskets in the fourth to get the win.

It was a balanced attack all night for the Lady Raiders, as all four scorers finished in double digits, but they had to fight back from an early hole.

The Lady Eagles got out to a 17-13 lead after the first quarter and added to in in the second for a 33-26 advantage.

A 20-7 third period put Trinity on top heading into the final frame, and they were able to maintain the lead through the end of the game.

Josie Aull led all scorers with 22 points. She hit four 3-pointers and went 6-for-6 at the line, with all of her free throws coming in the fourth quarter. Morgan Kinsey added 19 points.

Owensboro 70, Butler County 59
The Lady Devils (13-16) got a win at home over the Lady Bears (6-21) to close out the regular season. Owensboro finished the season with five wins in the last eight games after a tough stretch in the middle of the year.

No stats were available for the game.

Dakota Walden scored 32 points to lead Daviess County, who trailed 20-15 after the first quarter. Union County extended the lead to 38-25 by halftime.

The Panthers slightly closed the gap over the third and then took the lead late in the fourth before falling to the late jumper.

Chase Luckett hadded 13 points and Gavan Ray finished with 10 for Daviess County. Walden and Ray each had 7 rebounds.

Breckinridge County 69, Trinity 63
The Raiders (13-15) took an early lead but couldn’t hold off a second-half push by the Tigers (24-3), who extended their win streak to six games and have won 20 of their last 21 games.

Joe Brown hit three 3-pointers and scored 11 points in the first quarter to help Trinity take a 22-12 lead. Breckinridge County closed the gap to 30-29 by halftime.

The Tigers’ Kobe Poole scored 15 points in the third to help them go in front 50-47 heading into the final period. Breckinridge County hit 9-of-10 free throws down the stretch to hang on for the win.

Ethan Howard led the Raiders with 19 points, Brenden Wathen added 15 and Brown scored 14. Trinity hit nine 3-pointers and went 10-for-12 at the line, while the Tigers hit 22-of-25 free throws.