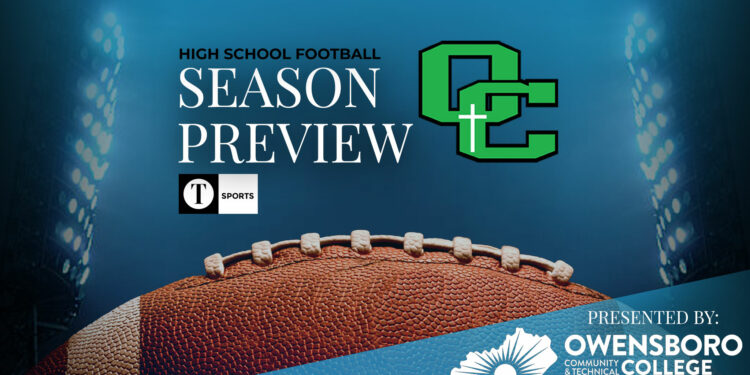 After winning seven of their last eight games to cap off the 2021 campaign, the Owensboro Catholic Aces look to continue their hot streak into this season.

Jason Morris will be entering his fifth season as the head coach at Owensboro Catholic. He spoke very clearly when asked about his expectations for this upcoming year.

“We expect to pick up where we left off last season and continue to take it one game at a time which will hopefully lead to a lot of wins,” said Morris.

One of the biggest challenges the Aces face will be trying to replace key playmaker Braden Mundy. Mundy played quarterback, running back, and wide receiver for the Aces on his way to racking up 21 total touchdowns in his senior season alone.

The first in line to fill his shoes will be juniors Tutt Carrico and Reid Clark. The two receivers combined for over 1,000 receiving yards and nine touchdowns during the 2021 season, as both of them will look to take a big step forward this year contributing on both sides of the ball.

When asked about keys to success this season, coach Morris expressed the importance of the development of sophomore quarterback Brady Atwell. In Atwell’s lone varsity start last season, he was able to rack up 209 passing yards and four touchdowns while leading the Aces to a resounding 46-0 victory over Mclean County.

Vince Carrico was also very impressive in his freshman year, leading the area with 199 tackles to go along with 16 tackles for loss.

Atwell and Carrico each showed a lot of promise putting up those kinds of performances as freshmen. Morris mentioned upcoming freshmen Barrett Evans, Cam James, and Andrew Garvin as players who will also all get their shot to contribute at the varsity level for Owensboro Catholic this season.

The continued improvement of the offensive and defensive lines are another thing coach Morris pegged as an important key to the season. Gabe Hodskins, Tyler Simone, and Chris Lewis will be big factors for the Aces in the trenches as they continue to improve.

An area that the Aces head coach would like to see some improvement over last season is their pass defense and playmaking in the secondary. Senior defensive backs Michael Hyland and Lincoln Ferguson will look to bring their leadership and experience to help bolster this Owensboro Catholic defense on the back end.

The Aces will open up their season at Eagle Stadium on August 19, where they will take on city-county rival Apollo High School at 7 p.m.