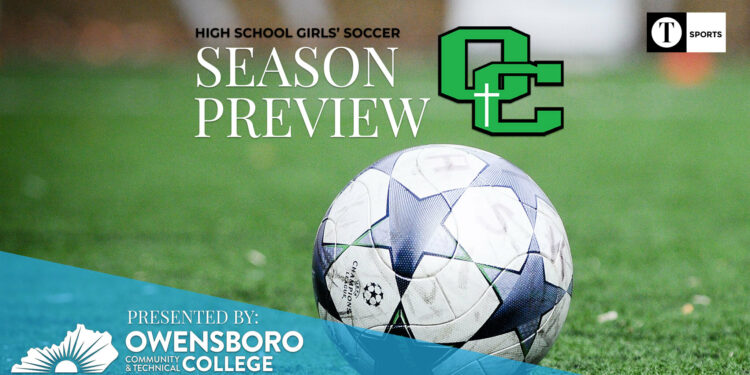 The Lady Aces finished the 2021 campaign owning a 19-6 overall record, defeating Daviess County in the District Championship 2-0 before two late goals pushed Ohio County past them 2-1 in the 3rd Region Championship. The loss is still in the back of the minds of Owensboro Catholic’s coaches and players, leading it to set their high expectations for 2022.

“Our expectations are to get back to state, win district and region, and All A,” said Head Coach Andy Hines. “We have set our goals high this season. We feel like we beat ourselves last year in the regional final allowing Ohio County to get to State. Seeing Henderson, a team we beat get to the final four, we feel like that should have been us.”

The Lady Aces return the vast majority of their 2021 roster, including a number of key players such as junior Abby Payne, senior Maddie Hayden and Mallary Bailey.

Payne is one of the premier goalkeepers in the state, recording 12 shutouts to place in the top six of the Commonwealth in her 23 games she played last season. Hines expects her to be a huge asset in goal once again this season, paired with a strong back line of Rachel Traylor, Annie Helwig, Elizabeth Hayden and Elle Brey that allowing 25 goals in 25 games in 2021.

Hines said that Hayden comes into her season as arguably the best player in the region. Her play in 2021 backs the statement up as well, as she broke the single-season goal record for the Lady Aces with 44 to go along with 23 assists in her junior year.

But Hayden isn’t the only weapon that Owensboro Catholic has, as Hines expects multiple players to see their scoring numbers take a leap this season.

“Mallary Bailey who had 14 goals and 13 assists comes back as a junior and I look to see her scoring many goals this year,” Hines said. “Katie Riney has been great in preseason and brings back 13 goals and 16 assists. Junior Ginny Young is a talented player who had 11 goals and 14 assists.”

The Lady Aces have brought in reinforcements as well, as they have Aubrey Randolph as a new addition, Jahara Ward, Carmen Brauer, Isabella and Sophia Hayden who all are sophomores that Hines said will be getting a lot of playing time this season.

With a fairly deep roster, Hines said that they are focusing on staying healthy and scoring goals while working as a team. This includes being strong mentally as well, noting that if they can play under control with speed and have a short-term memory they can compete with anyone.

“For us mental toughness, we have lacked discipline at times if it was in front of the goal or when something didn’t go our way,” Hines said. “We need to come in being mental tough and ready to fight. I also think we need to improve moving the ball faster and quicker. Speed of play and playing with a purpose to get in behind the goal.”