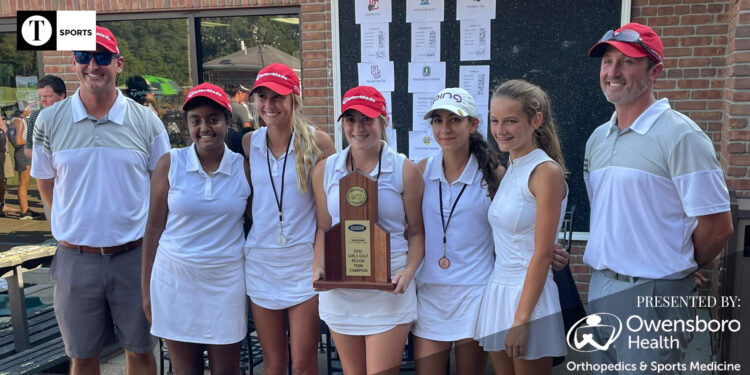 The Lady Panthers were crowned the 2nd Region Girls Golf Champions after their dominant performance on Tuesday, while Apollo’s Mary Ann Lyons also qualified for state individually for the third time in her high school career.

Daviess County grabbed first by a landslide, shooting a 325 with the second-place team being Madisonville-North Hopkins at 380. Owensboro had a pair of golfers compete in the event individually in Ryann Kasey (115) and Ellie Watson (116), while Owensboro Catholic finished with a 385 led by Hannah Robbins and Addie-Belle Rutman’s scores of 91.

Claire Reynolds led the Lady Panthers in the 50-plus stroke victory, placing second individually with a 73. Claire was able to bounce back coming off of one her higher rounds on the season at the KGCA All-State Championship this past weekend and Co-Head Coach Brandon Reynolds couldn’t be more proud of how she handles herself in practice and in matches.

“She’s young and she works rear end off too,” Brandon Reynolds said. “She’s been playing really well. She had a rough time on the first day at All-State. She was cruising along and made a 10 on a par five and that’s golf. We try not to put too much expectations on her because she’s young. Just want to let her go out there and half fun mainly is what we try to do and want to preach to her.”

Claire heard the message of going out and having fun loud and clear, dialing it on the course today and letting her improved accuracy and general improvement she said she’s seen in herself over the past season shine.

“I was just kind of wanting to stay calm and focused and not get ahead of myself,” Claire Reynolds said. “I did not want to worry about what everybody else was shooting and focus on myself.

While also being proud of her own performance, she was thrilled to see her teammates putt and shoot off the tee very well in the regional tournament. Baylie Billingsley and Alexa Salamah followed close behind Claire by finishing seventh and eighth respectively with an 83 each, while AnnaLee Yager also finished in the top-ten with an 86 to round out the team score.

Co-Head Coaches Jonas Billingsley and Brandon Reynolds were thrilled with the team’s play as well, as Brandon credited the Lady Panthers success to the time that they put in outside of matches.

“They put in the work,” Brandon Reynolds said. “That’s the thing. Those girls put in work. Even on days where we say ‘hey take the day off,’ they’re at the golf course chipping and putting, sometimes as a group and sometimes by themselves. They work hard.”

Now Claire and company are ready to compete at state, this being the second year in a row that the Lady Panther has qualified. While she hopes to have success individually, she’s confident that her team can show that their team is amongst the best in the Commonwealth next week.

“I hope that we can place in the top-ten at least,” Claire Reynolds said. “I would like to see myself in the top-ten as well. I just kind of need to shoot around in the 70’s and putt pretty good and I’ll be fine.”

They will be joined by Lyons of the E-gals, who shot an 84 to help her qualify for her third trip to state. Coming off her performance last season, Lyons wants to take that experience and grow on it this time around.

“My chipping and putting has gotten much better since last year,” Lyons said. “I’m working on some of my irons right now, but I feel pretty confident that we can have it figured out for next week and show up to the semis with a lot of confidence.”

The state semis will be held at Owensboro Country Club on Tuesday, Sept. 27, giving local golfers a bit of an advantage with the course being right in their backyard. Lyons is excited about playing in her hometown, as she and Daviess County will look to advance to the State Tournament in Bowling Green.

“Owensboro Country Club I actually don’t get to play that much,” Lyons said. “But I have a friend who’s a member there so that definitely helps and I play there every year in the GO Junior Golf Series. So I’ve seen enough of it that I think that I honestly now can sit down at our kitchen table and go over what I want to do on this hole and so on and so forth.”