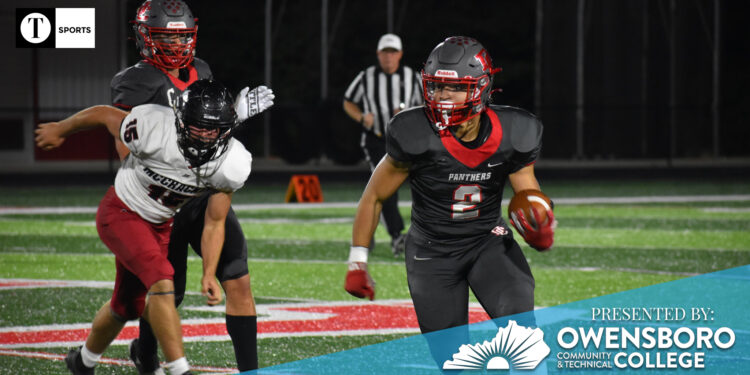 The Panthers continued their recent dominance of district rival McCracken County on Friday night at Reid Stadium, defeating them by 20-plus in the third straight matchup between the two by a score of 48-20

The Mustangs started the game with a bang, as running back Zeno Cornelius rushed for 37 yards on the first play from scrimmage. Although they couldn’t do much with it, failing to convert on four down later in the drive.

The Panthers and Mustangs would end up punting the ball back and forth for the remainder of the first quarter. Daviess County opened the second quarter with a long drive that ended in a Jack Ball rushing touchdown. Panthers would go up 7-0 with 11:07 left in the second quarter.

On their next possession, Lake Wilson found Luke Floyd over the middle as Floyd took off for a huge 63-yard receiving touchdown. Moments later, Nolan McDonald recovered an onside kick to give the ball right back to the Panthers.

“Nolan McDonald is really our spark plug,” Panthers head coach Matt Brannon said. “Every time he makes a play the team feeds off of that.”

DC drove the ball straight down the field again and Bryson Parm would find the endzone for the second time on the night. In a matter of two minutes, the Panthers scored twice to go up 21-0 with 7:22 left in the first half.

The Mustangs were finally able to get something going, driving the ball nearly the entire length of the field before Pryor Lamb found Jordan Bridges in the endzone for the touchdown. Just before halftime, Sean Higgs converted a chip-shot field goal to put the Panthers up 24-7 at half.

The second half started very similarly to the first, with both teams punting the ball back and forth. Later in the half, Lamb found Gavin Crass in the endzone for an 11-yard passing touchdown to make it 24-14.

Decker Renfrow returned it all the way down to the 38-yard line on the following kickoff, and moments later would catch a 22-yard touchdown pass from Wilson.

The Panthers continued to dominate, getting the ball back and driving it down the field once again. This time Jack Ball ran it in all the way from the 38-yard line for a touchdown.

The Daviess County defense got yet another stop and Wilson found Bryson Parm wide open out of the backfield on the first play of the drive for a 54-yard passing touchdown to give them a 45-14 lead.

The Panthers would end up winning this one 48-20, led once again by stellar play from their defensive unit.

Coach Brannon made an emphasis on his offense improving over the past few weeks, and they delivered. They totaled 458 offense yards on the night, getting it done on the ground and in the air.

Bryson Parm put on another impressive performance, which seems to be the usual for him at this point. He finished the game Friday night with 161 total yards and three touchdowns.

The two-headed monster at quarterback showed to be very effective once again for the Panthers in this one. Lake Wilson finished with 244 yards passing and three passing touchdowns, as Jack Ball racked up 97 total yards and two touchdowns with his legs.

“I think we played the game we felt like we could play all year,” Brannon said. “I think just figured out the dynamics between Wilson and Ball was the key for us.”

Daviess County improves to 5-2 and 2-0 in district play heading into their bye week.

“Our bye week could not come at a better time,” Brannon said. “Seven weeks in and we’re beat up and have some nagging injuries. It’s going to be really good for us.”